In a rare August visit to Algonquin Park, Grant and I decided to try something new and different again and stay on a Fork Lake, which is accessed via Sunday creek. Fork lake is an easy lake to access as it requires no portages to get to, and is only a 3-4 km paddle from the access. You may think that this combination would be a recipe for seeing lots of fellow campers, but due to the fact that fork lake only has two sites on it, and only one of those sites is really any good, the stay on fork lake is pretty quiet. 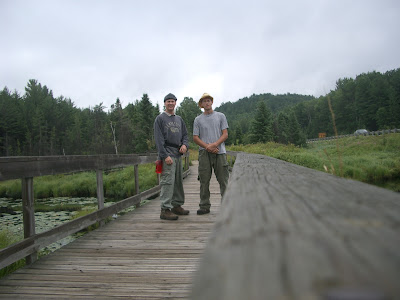 Grant and I on the boardwalk bridge over the bog at the Sunday Creek access. There is a nature trail here that winds all through the bog to the left, we chose not to walk it this time, but I think we might take the time to walk it if we ever go back here. (I would come back here in the future with my friend Matt, only to pass up walking this trail again... next time for sure!) 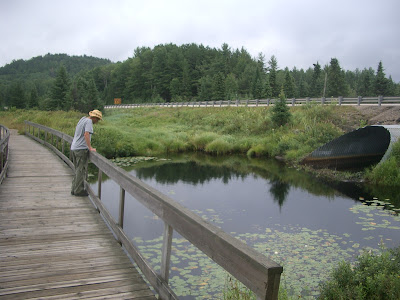 An interesting part of this launch is that after paddling 10 feet, Grant and I both had to get out of the canoe to lift it and our gear over the first of many beaver dams that blocked our way. Even more interesting is that you have to actually paddle your canoe under the culvert you see here to get to the other side of Highway 60. 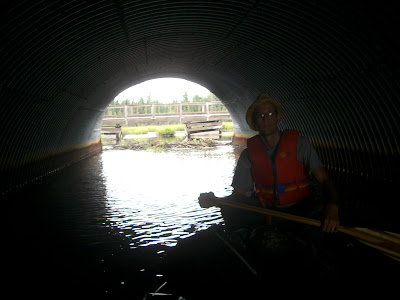 A shot looking back at the bridge over the bog from which we came, as we paddled through the culvert. 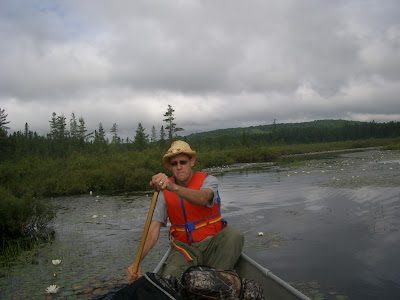 The trip down Sunday Creek was really a lot of fun. I enjoy paddling down a river far more than crossing an open lake, you just feel like you are really getting somewhere even though I am sure we are only going half the speed we would paddle if we were on an open lake. Lots of stuff to look at in the river, and beaver dams to try to ram over. 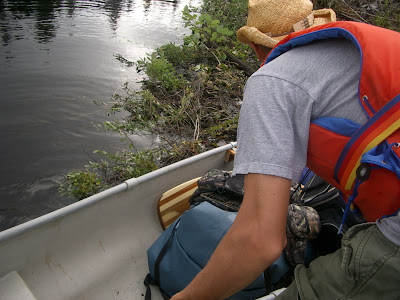 Here we are pulling the canoe over another beaver dam, still on our way in along Sunday Creek. It is worth mentioning that going in August was a rare treat for us as we are very used to going into the park in the cold months of May and October where you have to pack a bit more clothes and a warmer sleeping bag. We usually wear heavy ankle high hiking boots into the interior, but I think here Grant was wearing running shoes and I was wearing Crocks of all things, though they came in handy for wading into the water to pull the canoe out of the shallow spots by the dams. Much like every other trip we have made into the park, it rained on us driving in again this trip but also like every other trip soon passed and turn into a nice sunny day. I remember the sun finally poking out of those clouds on the paddle in and the temperature shot up really fast. It was nice to be able to get my feet wet to cool off. 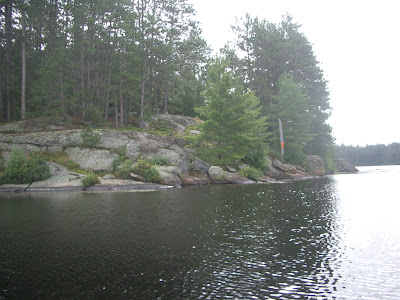 This is a site we stopped to check out on Norway Lake, which you must pass trough to get to Fork Lake. This is one of only two sites on Norway Lake as well. 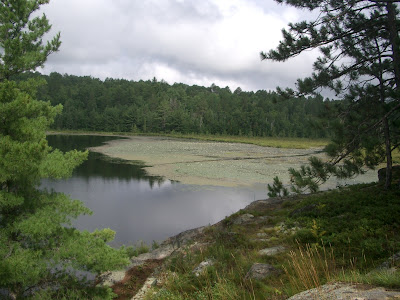 A view of the mouth of Sunday Creek as seen from the site on Norway. Not really a nice site to swim from In my opinion. 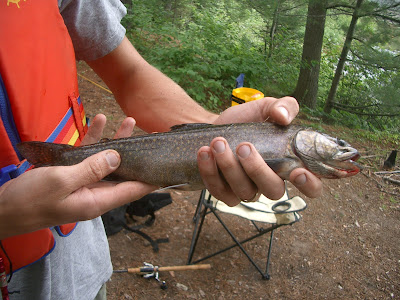 The first and so far only Trout either Grant or I have ever caught in this park. We weren't even trying to fish, we were taking a short 10 minute paddle to the single portage on the end of Fork lake, Grant threw out a line just for something to do, and boy was he and I shocked when he pulled in this fish. We quickly turned the canoe around back to our camp site and started a cooking fire. 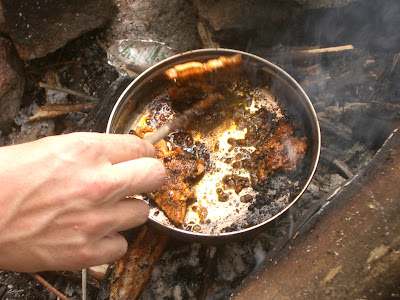 Grant fillet the fish about 1 minute after catching it, and we had cooked and devoured it about 10 minutes later. It's interesting but we did not need any oil to fry this fish, it seemed to cook in its own natural oils. It was just about the best tasting fish I think I have ever had. With every other food we have to eat coming out of a bag, it's refreshing to get a hot fresh meal like this trout. 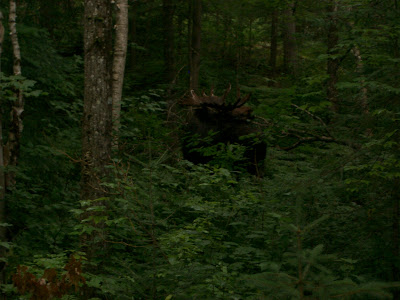 Later on that day Grant and I decided we would walk the portage from Fork Lake to Jean lake, and that little walk turned into just about the scariest 30 seconds of my life. As we were turning a bend in the very overgrown portage, Grant stopped in his tracks, pointed down the trail and said, "Blake! A bear!". He then turned 180 degrees, ran straight past me and continued to sprint directly back towards the canoe. I chanced one millisecond to look ahead of me, saw a gigantic dark brown mass just off the trail 40 feet ahead of me, turned, and did exactly the same thing.
Now I know that you are not supposed to run away from a bear as it may lead it to give chase, but Grant had already started this little faux pas so what was I supposed to do, stand between him and a no-doubt already charging bear, or get the heck out of there too? Well my heart was pounding and after about 10 seconds of sprinting I yelled to Grant, "Wait! Stop running, this is not what we should do." If it were chasing us we would have no chance of outrunning it anyways as we were still a few hundred meters away from our canoe.
We both stopped. We both listened. We heard no bear chasing us, so we slowly turned around, walked a few feet back up trail, and took a second look at what we were running from. What did we see? A giant bull moose! This thing was huge. You may have seen a moose on TV, you may have seen the ones around Highway 60 that lick the road salt, but you have never seen one like this. This moose does not lick road salt. This was a giant of the woods.
We now better understood our situation, this was not a bear, but this was still a very dangerous animal, and were were clearly within charging distance. This moose was also not backing down, it was not afraid of us. We decided we could not leave without at least a half decent picture of it so I chanced a few more feet towards it, climbed about 6 feet up on some tree branches and snapped a few shots. The picture does not do it justice. Needless to say he was not going to move for us to continue our trek to Jean Lake, and we were not going to push the subject. We never did finish our walk along that portage, and curiously Grant was not nearly as enthusiastic as usual about wandering through the woods for the rest of that trip. 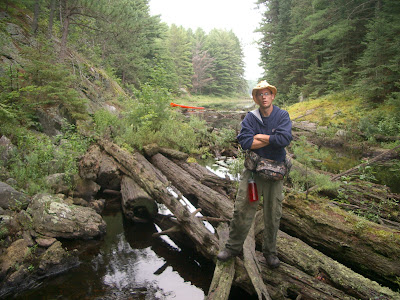 Grant standing on some logs at the start of the portage to Jean Lake. 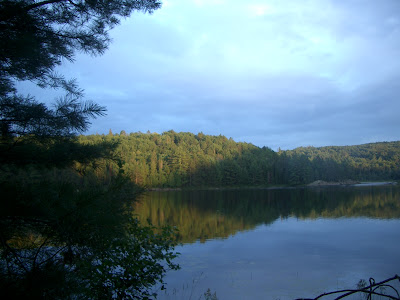 Unfortunately for us, when we initially arrived at Fork Lake we found that the site we wanted was occupied, leaving us with the only other site on the lake which was pretty small even for two guy's. As we were only staying for two nights this trip, and it was Friday - the start of the weekend, I figured whoever was staing on the island site we wanted would be there for the rest of the weekend. We chanced a paddle near the island to check it out and i could see that it was a great little island with a nice mix of open area and a nice little patch of trees to boot. Man was I dissapointed it was already taken! 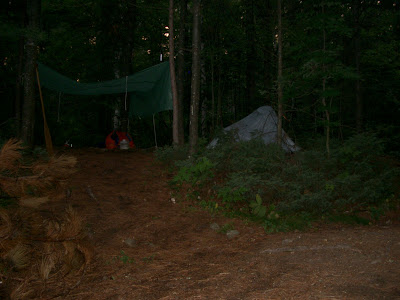 A photo of our site from the first day. you can see how overgrown this site is, and how uneven the ground level is. 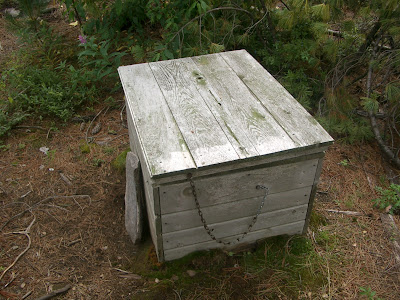 The thunderbox. Any questions? 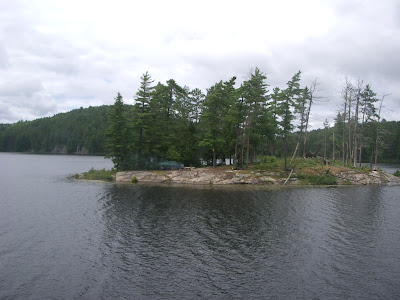 The second day we awoke and grant went out in the lake to fish when he noticed that unbelievably, the island site that we wanted so bad was now open! Somehow the campers on that site must have packed up and left in the wee hours of the morning because we never saw them go. Very strange that they would leave on a Saturday, but I was not complaining, against all odds, we now had a chance to take the glorious island site! Only one problem: we had to get our gear on the site to claim it or else risk losing it to anyone else entering the lake for the night. Our whole camp site was still set up on the crummy site including our tents and all, so we decided to just grab and drag out assembled tents and all of our gear into the canoe and bring it all to the island as soon as possible. We set a personal best record time for breaking camp, as we had completely moved our whole camp to the island in less than 10 minutes.
turns out our fears we unfounded, as for the rest of the trip no other campers entered the lake, so essentially that lake was ours for the rest of our stay. Silence and solitude. 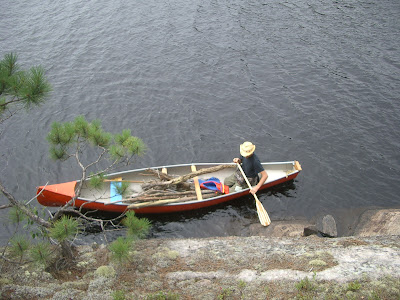 Canoes are great workhorses, it is much easier to paddle a couple hundred pounds of wood across a lake than to drag it by hand through the forest. 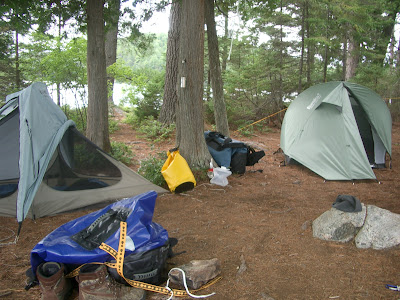 The island site turned out to be everything we had hoped for and more. It gave us great flat rocks to enjoy the sunshine on, trees to procvide shade for out tents, a great swimming spot that we made use of in the hot August afternoon, and a great view of the stars that came out that clear night. 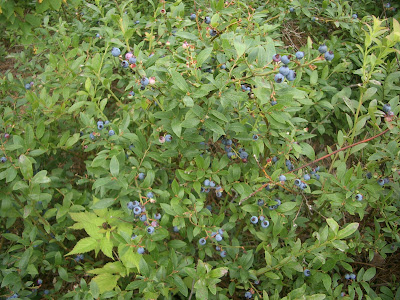 Our island site also had one other very pleasant supprise for us. Most of the open areas were covered in hundreds of wild blueberry bushes that had berrys perectly rippened on the branches. Together Grant and I ate handfull after handfull of the sweet berries. It was just our luck that we were there in early August as the berries would fall off the plant by the dozen to fill your hand. Fresh fish and fresh fruit from the land all in one trip. 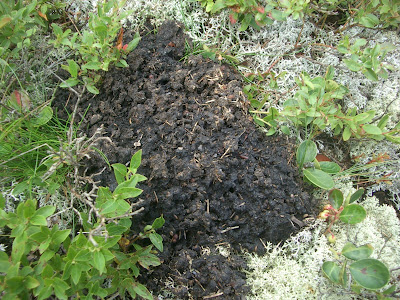 We ventured for another hike up a hilltop overlooking the South end of the lake and found that black bears had been here as well. You can see from their droppings that the eat quite a few blueberrys this time of year too. 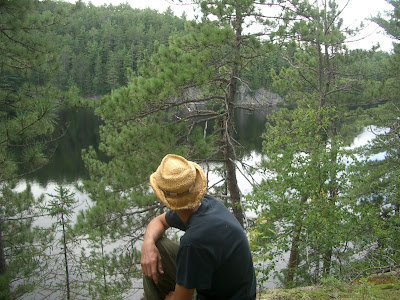 A photo of grant on the hilltop near the bear poo. 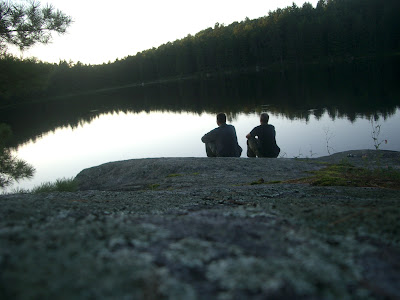 This is the part of the island that we swam from. As you can see, the weather was perfect. 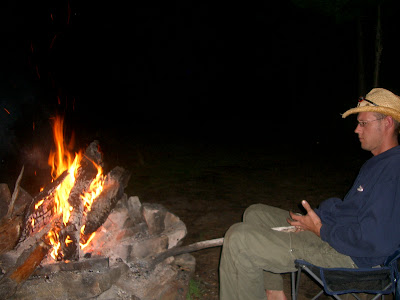 Because of the openness of the island, we had a nice moderate crosswind to fuel our fire. We gathered a huge old stump from the side of the island and dragged it over to our fire. To this day that fire was the best burning, biggest, and warmest we have ever had in the park. 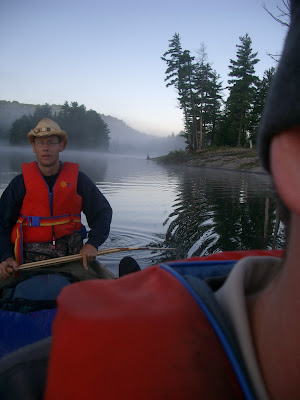 The next morning we paddled out of Fork Lake in a thick fog. 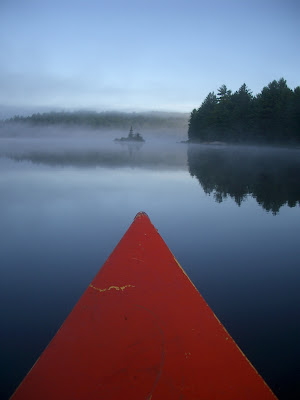 Fork lake is a great little lake that is off the beaten path and one I want to return to someday.
at August 10, 2008