This trip was a long time coming for the two of us. We had to cancel our May trip due to work and we didn't want to wait till Fall to get a trip in. We decided to head up on the Wednesday the night before the trip was to start. Some friends had rented a cottage on Oxtongue Lake so we stopped in for a visit. The cottage was nice but to small for the two of us to sleep so we said our goodbyes and headed to the West gate of the park where we slept in the car for the night. Cars aren't designed to sleep in so I don't recommend this as a great idea the night before you plan to paddle any distance the following day. Blake set his watch alarm for 07:00 and we woke up and drove to Canoe lake office. We planned on a trip from Smoke Lake to Little Coon Lake but since we didn't reserve a spot we had to change our trip plan upon arrival to the Canoe Lake permit office. Blake wanted to go in to Bonnechere for one night, Phipps the second, and come back out to Ragged for the last night.  I on the other hand had my heart set on a longer trip and wanted to travel to Phipps and stay until the morning we had to come out. Being the older brother I won the toss and we headed down into Bonnechere for the 1st night.

Smoke Lake was a big lake to paddle through and the putin was crawling with cottagers rushing to get to their weekend getaways, so my first impressions were not great as I have a bit of a problem with motor boats in Algonquin period.  For the most part the boaters were courtious and slowed down when passing by but a few didn't seem to notice we were there. We made quick work of Smoke Lake because for us the trip really doesn't start until you can't see any more cottages and motorboats.

Ragged Lake has a large number of really great sites and for those people looking to get away and only want to contend with one portage this lake would be great. We noticed as we got further into the lake that the South end is littered with dead heads and evidence of a lake with a much lower water level prior to the logging boom in the late 1800's. The dead heads gave me a bit of a chill as I imagined what the lake would have looked like prior to the dam at the Smoke Lake portage. 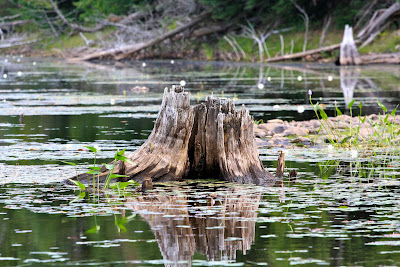 The portage into Big Porccupine was a bit longer at 590m and it had a greater elevation change which gave my heart a workout as it did Blake's I am sure. I carried the 20lb camera pack and the canoe and Blake carried the 40lb canoe pack (note from Blake: more like 50lb). We one tripped this one as we had on all the others to this point which surprised me because I was sure we both weren't in the best of shape heading into this trip. Once at the putin to Big Porccupine we sat and had a drink of water and I filled up my bottle with micro filter lake water.

We paddled into Big Porccupine and opted to paddle around the large land mass seperating the North and South portions of the lake. We weren't in a rush and we wanted to see as much of these lakes as possible scince this was our first journey into this part of the park. We checked the map and decided to paddle to the East of the two large islands as we approached the portage into Bonnechere. Looking back we both agreed that parting them would have been the way to go but as I said we were not in a rush. The portage into Bonnecher was a 200m one and it to was easy to conquer. At last we had arrived at the lake that we were camping on the first night. It is really exciting to paddle into a lake you have never been to and go through the motions of site selection. You would think that two brothers in their 30's could act like an old married couple but if you were there you would see that it is possible. From selecting a site with a view to a site with a good swimming access to a site with wind protection we argued about it all. I am sure that the birds and other animals in the area were wondering what was coming to spend the night when we arrived to scope out a site! We crossed the lake and from a distance we saw "THE SITE". The arguing stopped and we both just paddled closer and closer to the site just hoping it was vacant. As we rounded the point it became clear to both of us that this was the one and it was ours for the taking.
We lucked out and ended up getting what we would consider the best site on the lake. We setup camp and scoped out the entire site. The plan was to have a sleep in the afternoon once we setup camp and then get up and stay up for the meteor shower which was to peak that night. We woke back up about 17:30 but by about 21:30 we decided that the sleep we had in the afternoon wasn't sufficient to keep us up till 02:00 in the morning so we both turned in for a few hours. Blake set his watch alarm for 03:00 and at 03:00 we both got up and walked down to the rock point at the south end of the campsite. We had a great view of the sky from this point and saw approx. 45-60 meteors per hour. This is really something to see when you are in the park as the light pollution though not completely gone is much less than the rest of southern Ontario where we are from.


Friday morning we got up and took our time breaking camp. We had breakfast (oatmeal and some beef jerky) and then we pushed off for Phipps Lake. The water was like glass so paddling was relaxing. We approached the narrows about 2/3 of the way up the lake and manouvered through a 3' spot without hitting bottom. As we made our way North up towards the channel that leads into the start of the Bonnechere to Phipps portage I noticed a cow moose peaking around the corner of the inlet. Blake pulled out his camera and I kept paddling to get us closer. As we rounded the corner into the narrow channel we discovered that the cow moose had a calf standing just beside her. We almost ran out of water so we stopped and took some pictures and managed to film some video as well. I believe we were privilegded to have an encounter like this and for such a long time.  I was reluctant to attempt passing with her so close to the canoe, but eventually she and her calf wandered off into the woods. 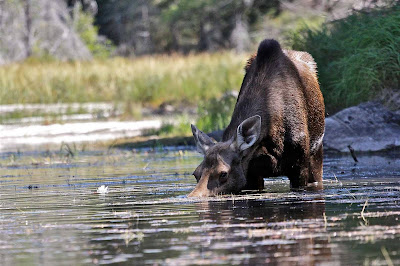 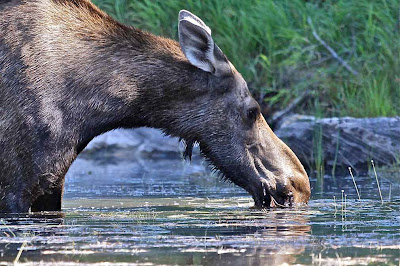 The portage into Phipps was very nice and with little to no elevation change we mangaed it in about 5 minutes. We emerged from the portage to the so called put in into Phipps and we were faced with an obstacle like no other I have come accross in the park. There before us was a swampy marsh with what at one time, most likely last May, was a creek but had now shrunk to nothing more than trickle of meandering water and mud. We loaded the canoe and decided it would be best to walk the canoe with the gear through the creek. After we made it about 500m closer to the lake the water was deep enough to get back in and paddle through it. 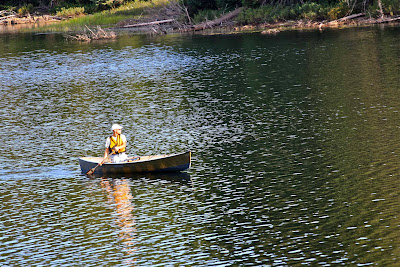 Phipps Lake was small and has two sites both on the North shore about 400m apart. We stopped and chacked out the West one but Blake thought the site was too enclosed and would be hard to see the stars come night fall. We paddled to the East site and after a few minutes we knew this was the site for the night. This site was up high on a rock and had a great view of the lake as well as the sky. There was plenty of wood laying all over the site so getting a fire going was easy. Blake spent the rest on Friday taking pictures and I jumped in the canoe and scoped out the entire lake. The weather was on our side and the rain gear we brought was not getting and use which was nice for a change.

After supper (beef jerky and freeze dried rice with chicken) we decided to paddle down the lake and check out Kirkwood Lake. Blake was taking pictures of every water fall we passed on the entire trip and so he thought it would be worth a trip with me to see this portage. The portage into Kirkwood is short only 175m and is to was relatively flat as far as portages go. I wanted to paddle into Kirkwood but there was no convincing Blake at this time, he was paddled out for the day. 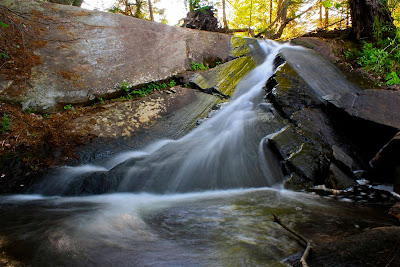 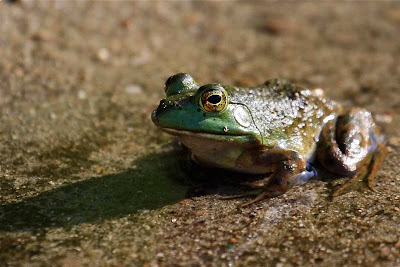 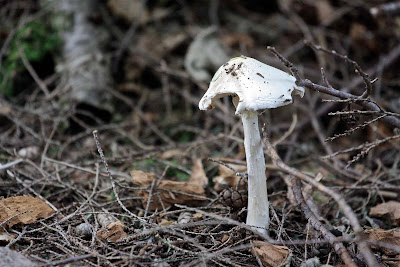 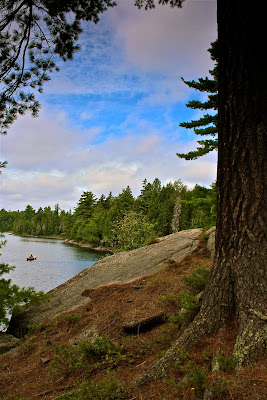 On Saturday we were getting a bit bored of sitting around so we decided to pack up our camp and move it to the other site on Phipps.  We grabbed some fire wood and were loaded to go in 10 mins.  The other site on Phipps is a bit more grown-in.  Great for getting out of the wind, but a little dark for spending much time at.  We stayed that last night there, but went to bed early to get a good sleep. 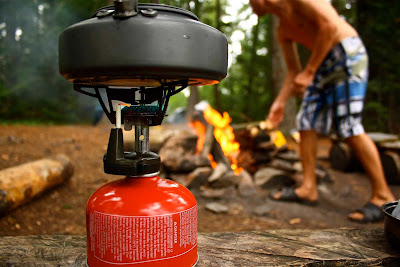 At 05:00 we got up and broke camp, luckily the rain had stopped some time in the night. We worked our way accross the lake and tredged through the shallow channel leading to the portage into Bonnechere all before the sun started to come up. We wanted to make good time so the camera stayed in the pack and before we knew it we were paddling into Bonnechere, no moose there to great us this time.  We didn't take it easy on the way out, we made it from Phipps to the car parked on Smoke in 4 hours.
at August 26, 2010