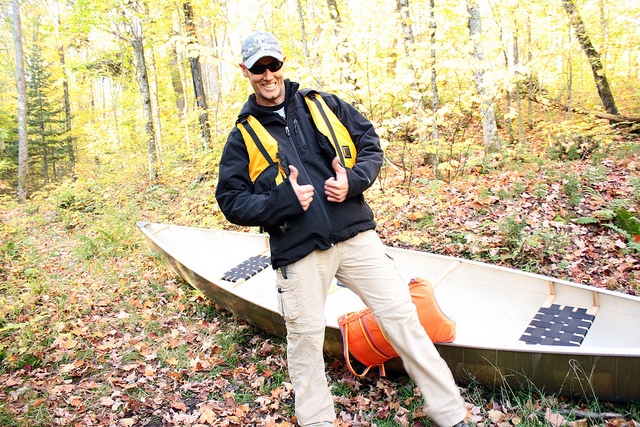 This trip was planned as a Fall weekend trip to check out the colours as well as a new lake for the group. The trip started from home in Haldimand county at 03:00 on the 7th. I picked up Blake and we headed to Hamilton to pick up Mike. We stopped for a coffee and a bit to eat at the Huntsville McDonald’s. We drove to the East gate as it opened at 08:00 and Access point #12 is very close to this gate. Thanks to the Algonquin Adventures forum we were able to gather information ahead of time as to the best way to locate the parking lot at the start of the portage into Pinetree. The first thing we noticed was how bright and amazing the leaves were. Before long we were loaded up and heading down the 1890m portage towards Pinetree lake. 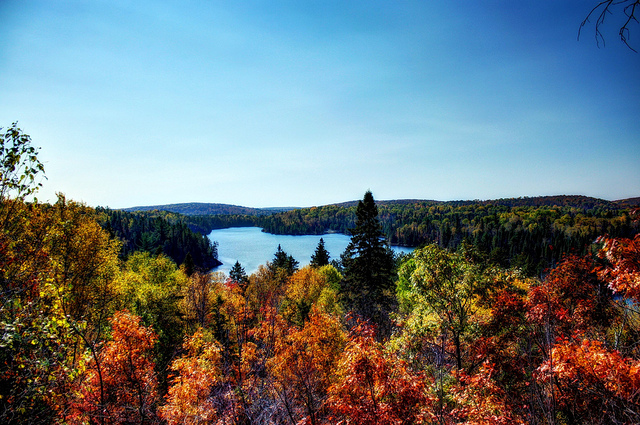 The portage was long and has many small ups and downs but was not what I would consider a difficult one as portages go. It is key to take the trail off to the left near the end of the portage as the trail to the right leads you to a swampy area adjacent to the lake. 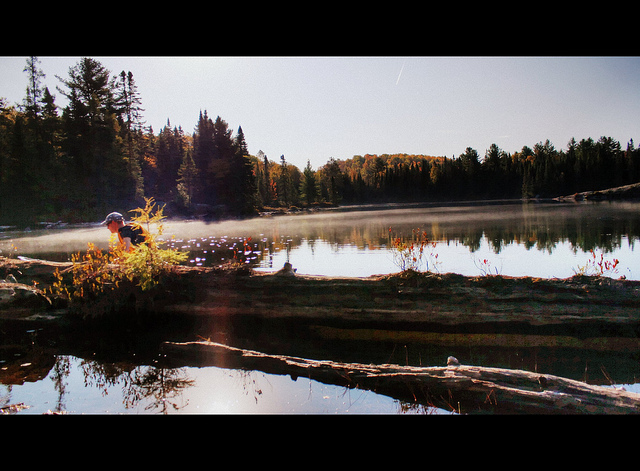 At last we came upon the lake and it was a great sight to see. The water was like glass and the bright coloured trees all around cast a reflection on the water like a mirror. The water was crystal clear and one could see the lake bottom from depths over 12 feet. The put-in was full of large grounded logs and made for loading and getting into the canoe a bit of a challenge. By around 09:30 we were pushing off and heading South down Pinetree lake.

We pulled out the map and Mike navigated from the middle of the canoe as we headed for the first site to scope it out. The North most side is elevated from the water and appeared pretty rocky. Blake ventured up onto the site to give it a once over and given that this was all new to us the temptation to push further into the lake had us back into the canoe and pushing onward within minutes. Heading South we came through a narrow channel and the lake opened up into the largest portion which was home to the last two sites on the lake. The South most site was taken by a solo camper so we headed around the point and pulled up the our site for the weekend. 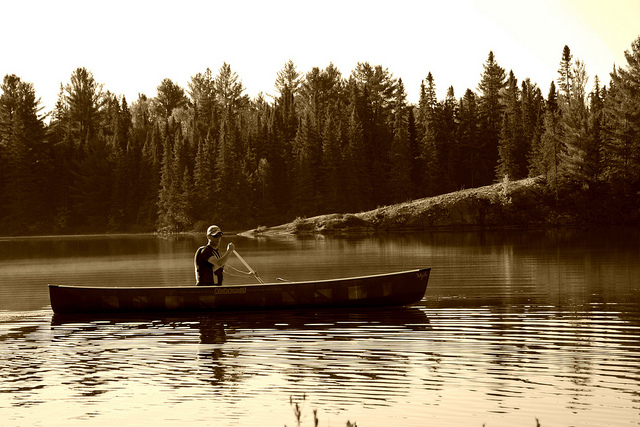 We made quick work of unloading and setting camp. Mike and I were tenting and Blake was using a hammock this trip. I located a level spoke about 30’ from the fire pit and Mike set up in the back of the site about 25’ from the privy. Blake setup beside my tent and by 11:00 we were all setup and we took a few minutes to check out the surrounds as Blake snapped a few pictures. We sat around, had some snacks and planned our day. 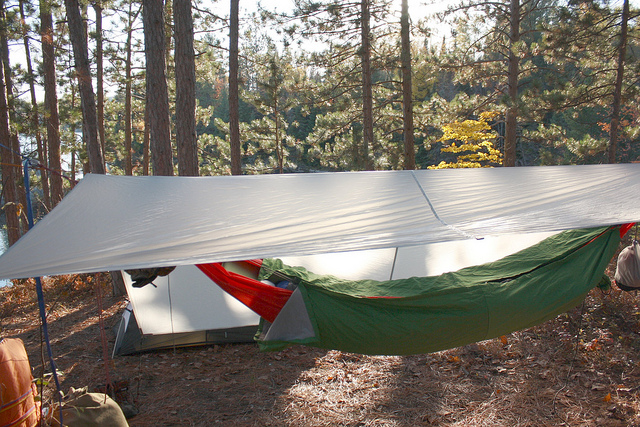 We jointly decided to plan an afternoon treck to Bud lake to try some Splake fishing. Bud lake is a small lake to the North and East of Pinetree. After a brief look at the map we grabbed our fishing gear, some snacks and some water and headed out in the canoe to try and pull along the shore close a hiking trail the we thought would help cut down on the bush whacking the we knew would be required to get to this lake. We walked the trail for about 45minutes and then decided it would be a good time for Blake to set our coordinates in his GPS. We walked off the trail about 25’ and sat down for a break while Blake attempted to find some satellites to allow the GPS to work its magic. About 3 minutes into this we heard large feet charging at us from the trail. Being mid October we all feared the worst and expected to see a large bull moose heading at us when we stood up. I was the first to stand up as my heart was pounding there in front of us was a couple people on horses out for an afternoon adventure. As we said hello to the couple and laughed about how we were scared of what we thought we heard we watched as the couple trotted off around the corner. At this point we realized that we had another 1500m to go before we would be able to leave the trail and head down the incline towards the small creek the flows from Leaf and Bud lakes into Pinetree lake. The bush was very dense and carrying fishing gear proved to be a challenge to say the least. We located Bud lake from the hill top and made our way down to it only to discover that we were at the beaver pond at the extreme West end and had to bush whack another 500m to get to the actual lake to attempt any fishing. The beaver pond had many prints around its banks including some medium sized bear tracks and some large moose tracks. Around 14:00 we finally got a chance to cast into the waters of Bud lake. Blake spent this time setting a route on his GPS to help us get back to the hiking trail. Mike and I tried a few spots but this end of the lake was very shallow and it was not panning out for us. We met back up and headed back into the woods following Blake and trying to conserve our water to make it back to our canoe with becoming dehydrated. After a long 2000m walk due South Blake stopped and said his GPS was telling him that the hiking trail was within 9m of our position. It became clear pretty fast that we were nowhere near the trail. We stopped and had another look at the map looking at the geography we decided to reprogram the GPS and set a coordinate 500m past the trail which was to our South. This was surely going to have us cross the trail at some point in the near future. Almost exactly 300m from this point we located the trail and started heading back towards the canoe. The walk was long and full of steep hills and switchbacks. We made it to the top of the lookout and stopped for a well deserved break but we were out of water at this point. We took some time to admire the sun as it seemed to be making a quick decent towards the Western hill tops past Pinetree lake. We made it back to the canoe and returned to camp to tend to our wounds and sore feet. Blake and Mike made the pact that they were not heading out for anymore adventures under my direction this weekend. 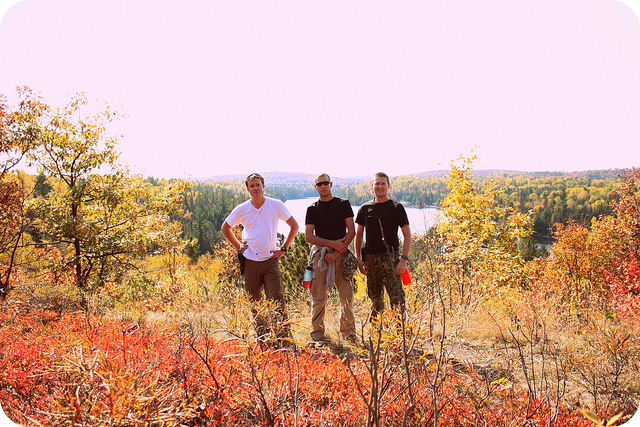 That evening we were all pretty tired so we had a small camp fire ate some dinner and after a short recap on the days events we all retired to our tents and hammock for a well deserved sleep. The weather was amazing and the low on the Friday night was 9 deg C which was much higher than we had anticipated and we all were hot that night. 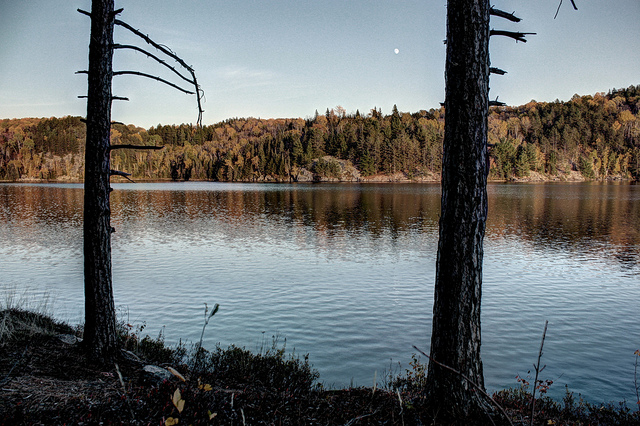 Saturday we woke to the sounds of wolves howling in the distance to the S/W. lake got up and setup for some sunrise pictures. I pushed off with my morning tea and headed into the westerly section of the lake to scope out some wildlife. At the narrows I came upon a mink that was crossing the channel. Shortly after the mink I came upon two beavers that were swimming across the lake. I coasted between them and they both slapped their tails on the surface and disappeared out of site. I headed to the South and paddled towards the sounds of the wolves. I found myself at the take-out to Fraser lake. The wolves sounded pretty close at this point and being alone I was not prepared to walk the Fraser lake portage with Blake and Mike not knowing where I was. I sat in the canoe and listened to the wolves until they were quite. The sun hadn’t reached this side of the lake yet and I was cold as I hadn’t dressed warm enough to out this long in the shadows. I headed back to the camp to help Mike cook up a brunch. 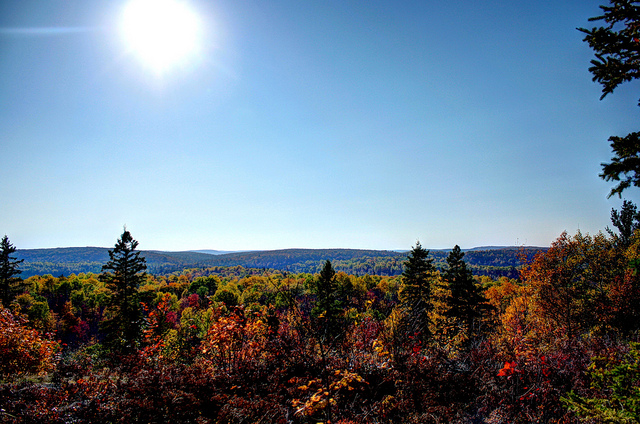 Brunch was a large chunk of back bacon sliced up into ¼” thick pieces and some potatoes and scrabbled eggs. We all shared the meal and spent the rest of the morning lounging around camp and gathering fire wood. Fellow AAer Tess had informed me that she would attempt to make a day trip into Pinetree for a visit that afternoon. Around 14:00 or so we noticed a canoe heading towards our site. Within minutes I recognized that it was Tess and her husband Norm with their three dogs. This was the first time we had ever met in person and it was a real joy. We spent a couple hours sitting around and talking about the park we all love so much. Tess had brought some refreshments and some snacks and we all shared in consuming these treats. Before it was too late Norm and Tess packed up and made their way back out to their vehicle. 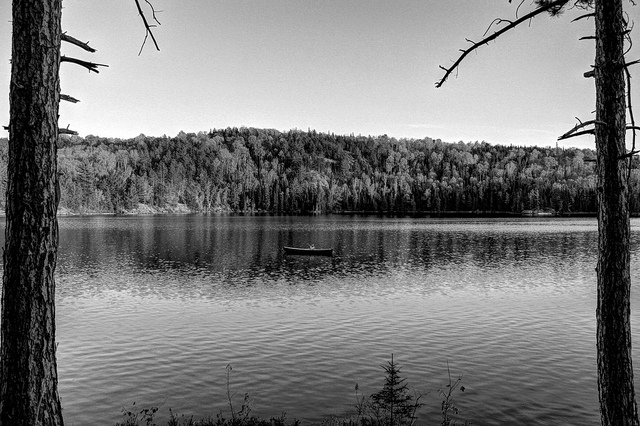 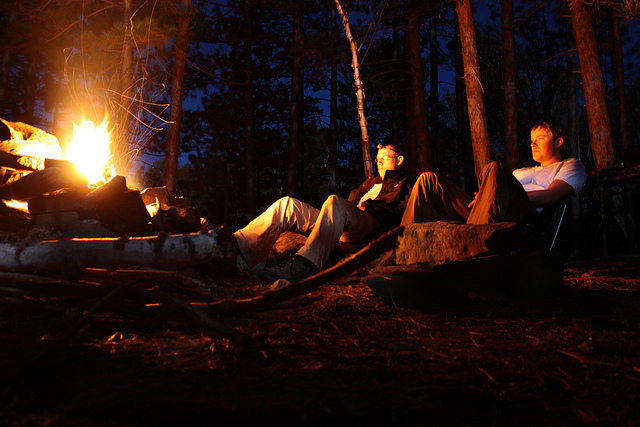 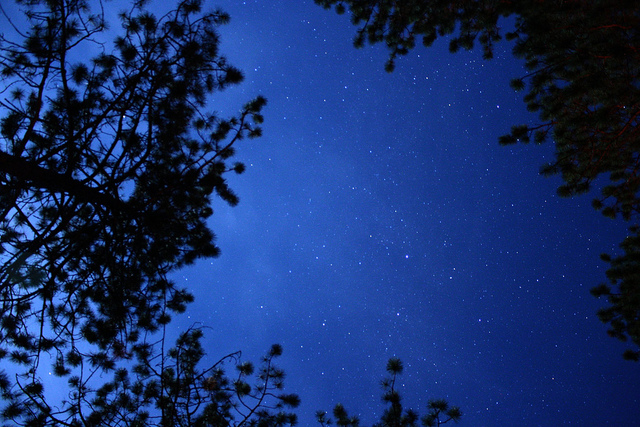 Saturday night we spent some more time relaxing at camp and I went out for a short paddle around the glass like waters looking for wildlife. I returned to camp just as the sun was falling behind the western hills. A fire was established back at camp and we enjoyed the night and turned in around 21:00. 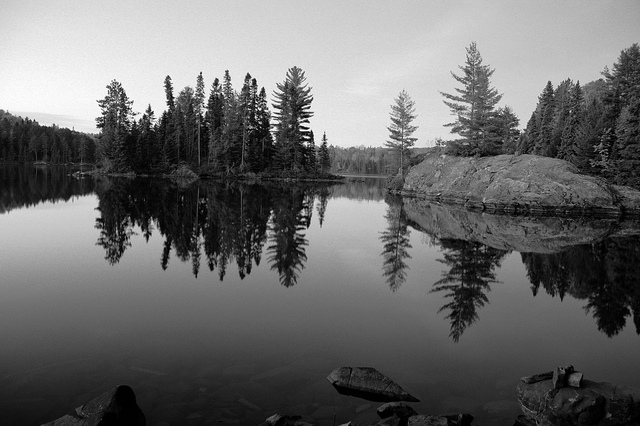 We all woke up around 06:30 to another beautiful day and started to pack up camp. By approx. 08:30 we were heading across the lake back towards the portage out to the car. I loaded up and headed down the trail while Blake and Mike sorted the packs and loaded the remaining gear. I was able to one trip the portage without stopping and I started to fasten the canoe to the car while I waited for Blake and Mike to arrive.


Here is a video that Blake made of this trip: 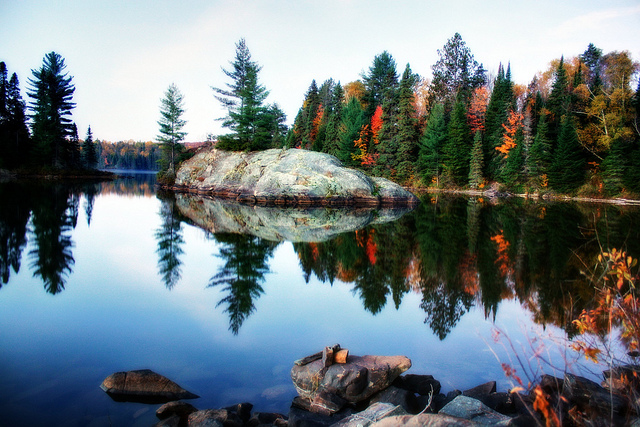 The drive back out towards Hunstville was uneventful but the traffic coming in for the weekend was crazy. I have never seen this much traffic on Hwy 60 ever. The parking lot at the West gate was full and people were lined up on the turning lane trying to get in and get permits.
at September 23, 2012