In January of 2006 we started planning an epic 3rd trip into Pen Lake with our friend Steve. This trip was going to be all about exploring all we could of the peripheral lakes and portages that feed to Pen, as well as some select rock cuts identified on our Chrismar map (Chrismar is a manufacturer of high quality mylar waterproof topo maps of the park). This was Steve's first trip into the interior of Alqonquin, and our first trip in May. 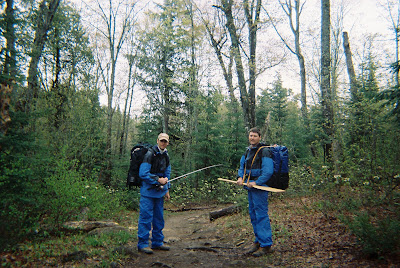 Grant and Blake looking like idiots in our $5 matching rain gear at the start of the Rock to Pen portage. The rain gear lasted about 300 m before the pants ripped to shreds. At the time we thought matching was cool, but viewing this shot after the trip explains why the campers we passed on the portage were laughing... 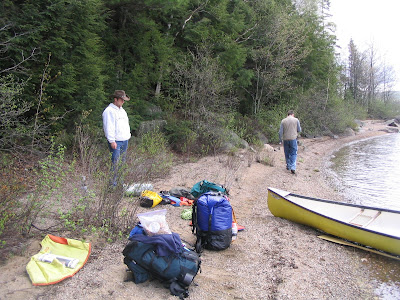 Half way across Pen we stopped for a hot lunch on the East shore. The lake seemed calm at the put-in on Pen, but after we passed the narrow channel between the two islands we were met with 2 foot waves that washed over the bow. I (Blake) was sitting in the middle of the canoe on the floor of the vessel in my torn $5 rain gear, as you can see in this picture my jeans are soaked. Steve on the other hand had a $20 pair of rain pants on that were of much higher quality and was dry. I now own the same brand. Lesson learned.
A further lesson learned, this trip was the last one in which I wore blue jeans. They take hours to dry once wet or damp and they weigh a ton.
The canoe you see here is a 16' heavy-duty fiberglass which weighs in at 93 lbs. This was the last time this canoe made its way into the interior. 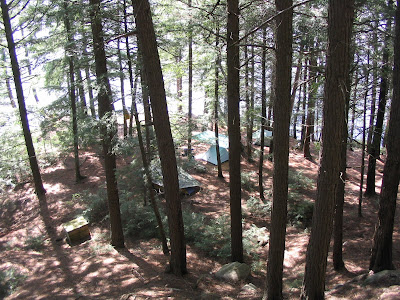 A view of our site. The last site on the east shore of Pen before you reach the Clydegale Lake portage. 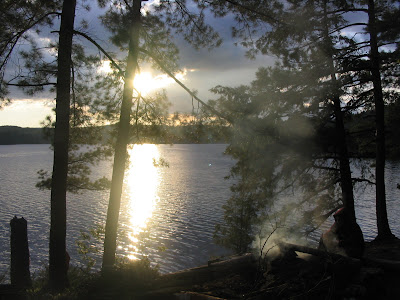 Blake enjoying a relaxing read by the fire during our first evening. Shortly after this photo was taken the weather turned cold and the 3 of us gave up on cleanliness and laid down around the fire, directly on the dirt. We all fell asleep there on the ground for an hour or so. The combination of very little sleep the night before in anticipation of our trip coupled with portaging a 93 lbs. canoe and paddling the length of Pen lake into a strong headwind must have taken a toll on us, but that warm fire was great. 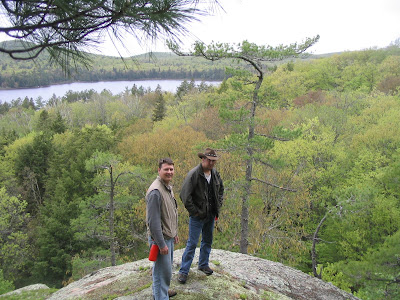 Steve and Blake on an outcropping we saw from the lake and hiked up to. 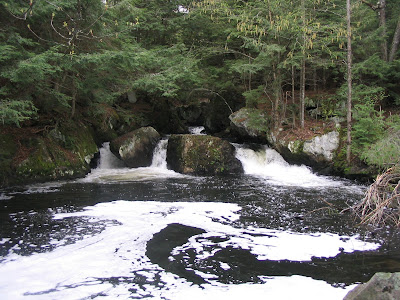 A great waterfall at the start of the portage from Pen to the Galipo River. 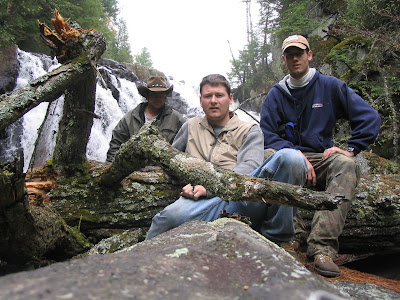 The 3 of us at the base of the big fall from Galipo River down into Pen Lake. Elevation difference between river and lake: 18m 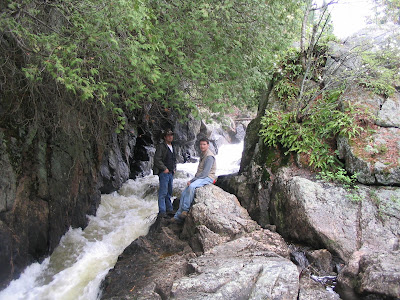 Steve and Blake standing by the fast moving channel between Clydegale and Pen Lake. 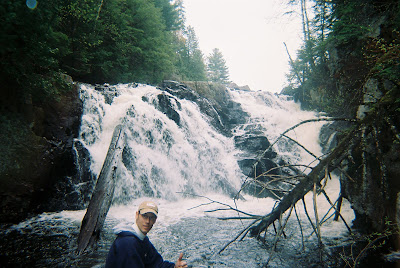 Grant by the falls from Galipo. 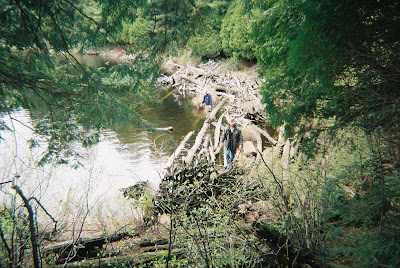 Grant and Steve log walking across a small bay north of our site. I didn't want to get my only pair of footwear soaked like Grant did moments after this photo was taken. Grant does not recommend log rolling in the interior of Algonquin. Lesson learned.
at May 26, 2006