This 4th trip into the interior of Algonquin was another first for Blake and I. After the last trip our buddy Steve managed to round up some friends that were willing to give this type of adventure a try. The one thing that I learned this time around was that no matter how many planning meetings you have prior to your trip newcomers will always find out the hard way. As you will see soon packing lite is an essential part of enjoying your trip not the other way around. 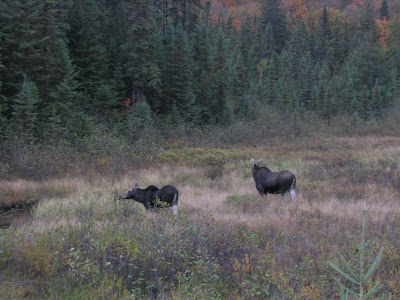 Because this team included six campers we drove up in separate vehicles. Just beyond the west gate we came upon two moose grazing in the long grass along highway 60. This was a first for the newcomers so we stopped and took some pictures. 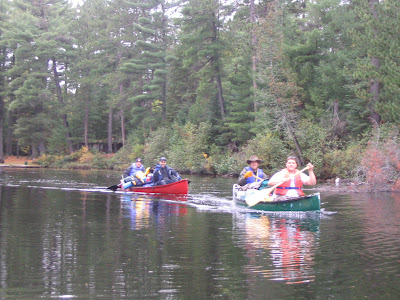 This above shot should be a poster shot for what not to take camping into the interior! I was a little concerned about the amount of gear our newcomers took along. My brother Blake and I led the way across Rock Lake and I felt it would be best to hug the west shoreline just in case they dumped their canoes or river barges which ever you might call them! We managed to get to the Pen portage with little excitement and then the newcomers got a taste of why you don't pack everything you think you might use or want when portaging into the interior. I explained that you carry what you pack and then Blake and I made our single trek up into Pen. Our friends that thought they knew better made four trips back and forth across this short portage before all their gear was finally on the banks of Pen Lake. I felt sorry for them but everybody tends to learn the hard way when it comes to giving up creature comforts to pack lite. 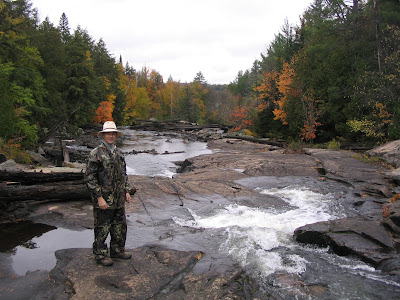 Brother Blake and I took some time to explore the top of the rapids leading into Rock Lake from Pen while we waited for our friends to recover from the portage. This is Blake in his new rain gear, the gear he made mention about in our trip#3 log. The rain gear is cool the hat isn't but that is just my opinion. I think he looks like a Dick Tracey wannabe. 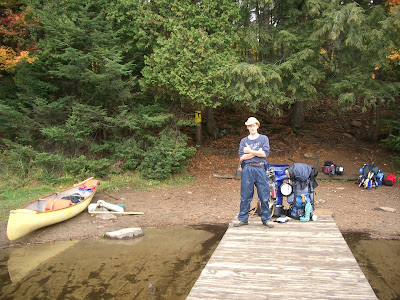 Some of our gear sitting on the dock at the put in to Pen Lake. You can see we both have canoe packs and they are a great thing when travelling in spring or fall (Rainy Season). 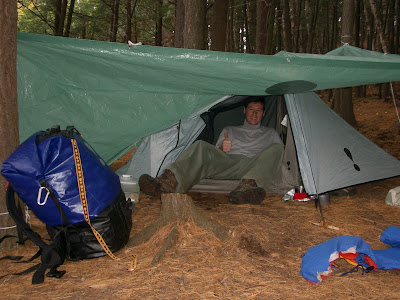 This is Blake relaxing in his tent at our Clydegale Lake campsite while the rain is coming down. Even with good tents it is always a good idea to make room in you pack for a small tarp like this one. Your tent may stay dry without a tarp but the area immediately outside the tent door will get wet unless you cover it with a tarp. This makes getting in and out much cleaner and less likely to track pine needles and dirt into you sleeping gear. 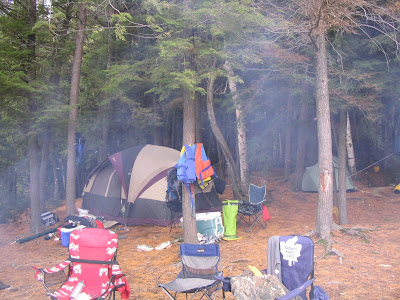 This is a picture of the site, notice the folding lawn chairs. We decided from past trip experience that taking a chair like this can pay dividends if your site has no tree stumps or other places to sit. If you look around you can pick up a small chair like mine in the middle. This chair has an aluminum frame and no arm rests. I can pack this chair inside my canoe pack and it weighs less than a pound. 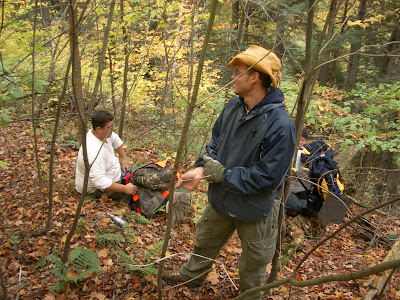 One of the excursions we decided to take was a trek through the woods to a small lake called Gale Lake. Though only about 800 m as the crow fly it was much longer given the terrain that we faced on our journey. Brother Blake made use of his hand held GPS ans a compass along the way. 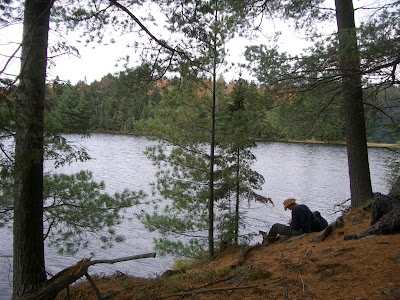 After about an hour or so we emerged on this really cool lake. The first thing I remember saying to myself was I wonder if this lake has any fish in it. later that day I made a return trip with my pole and spent some time trying my luck in a few choice locations. I never got so much as a nibble but it was worth it given the piece and quiet. 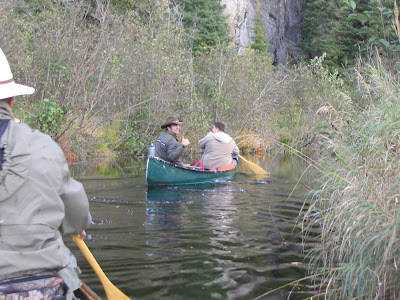 The second excursion of this trip was one up the South Madawaska river. This paddle was fun and attempting to paddle up over beaver dams against to current proved who was the most experienced paddlers of the group. The river brings you up to some rapids that in fall are too shallow to paddle up through. We pulled the canoes on shore and walked the portage up along the side of this twisting river. 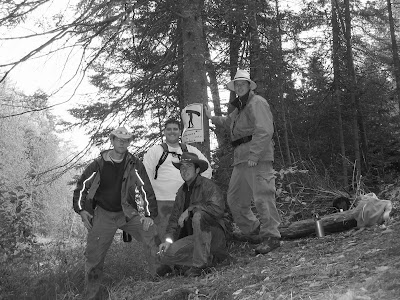 This was the four of us that made this day trip. We are posing beside the portage sign at the bottom end of the 630 m portage into Clydegale Lake. If you look closely you can see that my left leg is soaked. I made a rookie move when exiting the canoe at the portage and ended up slipping into the river. Wet feet and only one pair of footwear, not a comforting feeling. 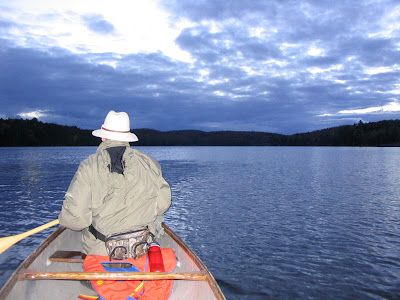 Our trip to the Madawaska took longer than expected and the days are short this time of year. We managed to get back to camp just before dark. It is always a good idea to take flash light and map of the lake whenever you venture out for little trips like this. If you run late and end up paddling in the dark a flashlight and map goes a long way to getting you back to camp safe. 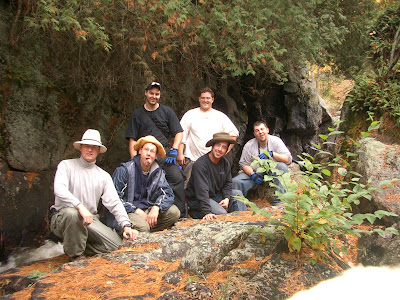 This was one of the only times the six of us stopped moving long enough in the same place to snap a picture. The swift water behind us is the flow from Clydegale down into Pen approx. a 9 m drop in elevation over a 200 m distance. I hear that the fishing is good at the base of the rapids in the early Spring though I have yet t try my luck. 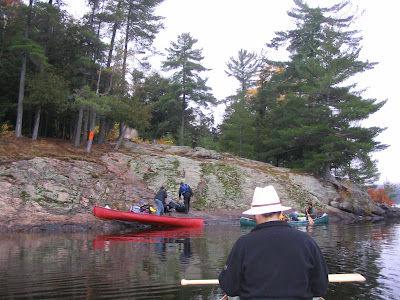 This is a shot taken while we were getting ready to head home. The reason for choosing this site in the first place was that we had a North wind on the first day so even though the site is elevated it provided cover. This decision came back to haunt us the second day when the wind turned right around and brought with it some rain. Over all the trip was a blast and this group of guys got along great. 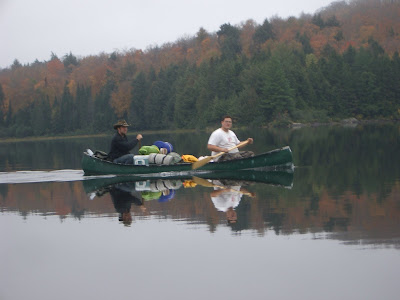 The journey out along Pen was awesome. The lake was like glass and this made paddling a dream. You can see in the picture just how much gear the others took in. I never would have imagined bringing in a cooler like the one these two brought along.
We all made it back and nobody got hurt.I was glad to have a chance to show this great place to some new people.