In September of 2009 I went on a trip to the park with my friend Matt.  Grant was not able to join us this trip so just Matt and I went.  Ever since Grant and I's visit to Fork lake and it's great island site I have wanted to return there.  As this was to be Matt's first trip to Algonquin, I thought that that lake and site in particular would be a great introduction.  As we were going into the park in late September and Fork lake is rather off the beaten path I figured we would have no problem getting the island site, and in fact would likely have the whole lake to ourselves anyways.


Due to the fact that there are no portages on the way to Fork lake and most of the paddle is along a small creek speckled with beaver dams, combined with the fact that water levels were expected to be fairly low, I decided to not bring my dad's expensive Ultralight Kevlar canoe and instead take the old "rubber" Coleman canoe that we have had for a few years.  The Coleman is heavy, slow, pushes water like a barge, has no yoke, and is not something you want to portage with.  It is however very durrable, and can survive any rocks, scrapes, ramping off beaver dams etc. that you throw at it.  Seemed like the perfect choice to take to Fork Lake.


Driving into the park it rained on us as usual, but by the time we reached the access point at Sunday Creek the weather had subsided and was a overcast, but dry day.  Maybe too dry actually.  In fact it had not really rained for weeks in our parts of Ontario, and when we got to the put-in for the canoe, I was shocked to see that the water level was a good foot and a half lower than when Grant and I had come there in August the previous year.  Looking at the mostly dry culvert we had paddled through just a year ago I realized that there was a chance Sunday creek was going to be very hard to paddle up without constantly getting out of the canoe to drag it.  We decided to put the canoe in and cross under the highway via the culvert to start our journey on the other side.
Well we bottomed out the canoe in the culvert and had to get out and drag the canoe through it to the other side. 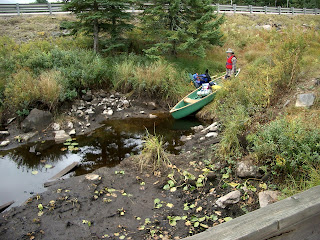 Where did all the water go?
On the other side of the culvert I got my first good look at Sunday Creek and I remembered as a 10 foot wide river was nothing more than a muddy ravine with some puddles periodically dispersed every few feet.  We could not canoe up this, it could take hours upon hours to literally travel a single kilometer.  Not yet willing to give up, Matt and I left the canoe in the culvert and entered the marsh on foot to see if the creek opened up after the next few bends.
Ever try to walk through a marshland?  Well its so overgrown that you can't see where you are stepping and every few feet there is a hidden hole that sucks your leg up to the groin.  Each bend we came to showed us the same bleak picture, a muddy creek bed with no chance of canoeing down it.  After about 200 metres of hellish treking we decided that it was no use, we would not be reaching Fork Lake.  We would not be staying on my favorite site in the park.  We turned around, hiked back to the canoe, caried it back to the van, strapped it on, and though: Now what?
Well the closest access from Sunday Creek was Rock lake, and I know it and Pen very well from the last few years of tripping.  Matt had never seen any of the park so why try not for a site on Rock or Pen and show him the cool places?  I just hoped that there was still a site open on one of the lakes for us...
We were lucky, of the 18 sites availible on Pen Lake, all but two were left availible.  As it was getting late in the morning already we happlily changed our reservation to Pen lake, put in the canoe and gear, and made our way across Rock Lake towards the Pen portage. 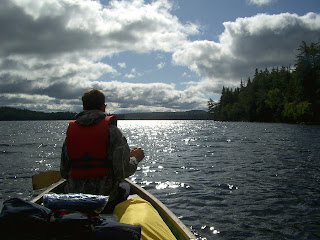 Making our way across rock in record time with a strong wind at our backs
What had seemed like a great canoe for creek running, the Coleman canoe was not designed as a lake crosser, and it was painful to see most of our paddling effort wasted on the huge bow-wake the Coleman was pushing.  On the bright side we were helped along by the strongest back wind I have ever experienced canoeing in the park.  the wind literally pushed us across Rock lake in record time.  I can only dream about the speed we would have attained in my dad's sleek kevlar canoe with that wind. 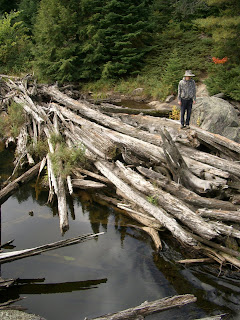 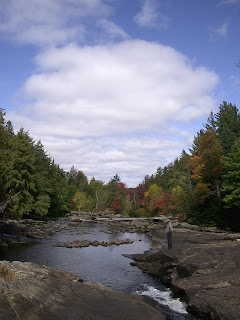 My favorite shot from this trip
After two tripping the portage, Matt and I spent a good while exploring the rapids that fall from Pen to Rock Lake.  It was very interesting to see this familiar site so dried up, in fact everything looked different to me about the area as the water was so much lower than I was used to. 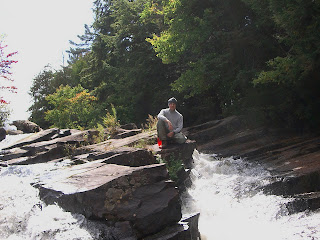 The park has all you need, including running water
We considered taking the site on Pen right beside the rapids, but Matt wanted to stay on the one of the islands instead so we made our short paddle over there.  We first stopped on the Eastern island, which is technically the only island, as the other one is ususually connected to the mainland with a narrow strip of beach.  I have stayed on this island before, and it is quite exposed to the North wind which was blowing like crazy still.  We left our canoe on the beach and walked to the back of the island, and hopped across the rocks to the other island to see how it looked.
I have also stayed on this island before, on the Southern site which is really nice.  It was however occupied, but we found the North site was open and it had a few more trees on it compared to the other island to block the North wind.  We decided we wanted it so we had to run back over the rocks to get our canoe and claim our site.  We knew that this lake was to be all but full for the night, so this site would not be free for long.  This assumption was true, as for the rest of the day we saw many dissapointed campers veer towards our site only to see that it was occupied and turn away. 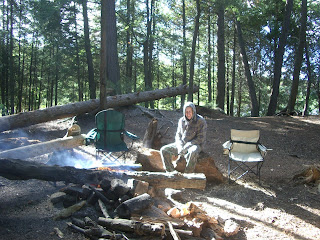 The wind was cold that first day, but it warmed up quite a bit the next day 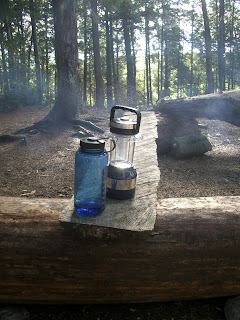 Relaxing eh?
We started a small fire and had some food but the wind was cold on our backs so we went to bed fairly early.  The first night the wind never let up, but Matt and I were smart enough to bring tarps with us which we positioned over our tents as wind blocks.  Inside out tents we could not feel the cold wind at all. 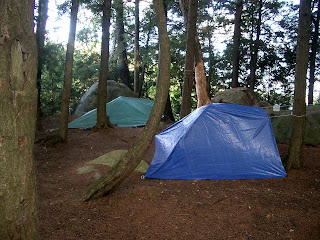 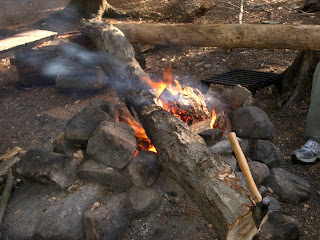 Something new this trip, I brought a small hatchet. I don't usually bring one when portaging, but then I never planned on portaging did I?
The next morning we woke up to a clear blue warm sunny day.  We set out to do some hiking, and paddled to the portage to Gem Lake, left the canoe and hiked up to the rock lookout that I had been to before on previous trips. 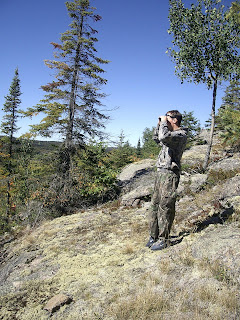 Here is Matt taking in the view 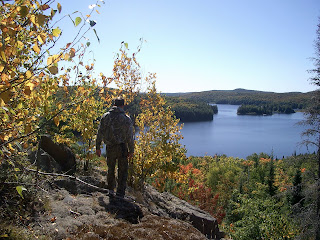 Living on the edge

After climbing down from the cliffs we hiked the portage to and from Gem Lake, and decided to gather some driftwood from the shore near the portage to take back to our site for firewood.  We loaded a couple hundred pounds of wood into the caone, something I would not have done with my dad's Ultralight canoe, but was easily handled by the bargelike Coleman.  We took our time paddling back to our site as the wind had totally stopped, the sun was hot and was nice to just feel the sun warming us up on the lake. 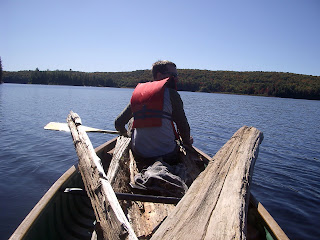 Like I said, it was nice to feel the sun on our backs the second day
On the way back we saw a huge snapping turtle sunning himself on a rock, he dropped into the water and I watched him swim away under our canoe.  The lake was so flat that day that I could clearly see the bottom of the lake the whole span between both islands, even though it was at least 15 feet deep.  Would have been great for snorkeling with that sun shinning through the water. 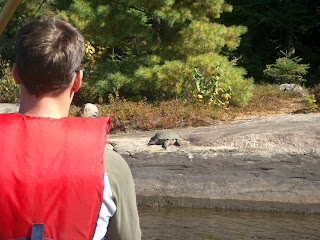 Turtle, likely older than both of us combined
We spent most of the rest of the afternoon relaxing around the campsite, but as it got later we decided to paddle to the end of Pen lake and maybe explore the falls that connect Clydegale Lake to Pen.
We did not anticipate just how slow the Coleman canoe would be crossing the lake, and by the time we reached the end we found the sun was only a few degrees above the horizon, it was turning to night and we would still have a long paddle to get back to our site.  We decided to turn around and make our way back rather than risk going any further.
As we paddled the sun set over the horizon and the stars started to come out.  It was fully night by the time we were near our camp and at this point we were basically guiding ourselves by the stars, the stars were very bright that night (and I know them very, very well), so it was easy to keep our bearings.
We finally approached our island and had quite a time finding the small gap in the rocks to squeeze our canoe through, I'm sure fellow campers where a little concerned to see us on the lake after dark, the temperature had fallen quite a bit and the air was cold.  We soon however made it to our site, fumbled in the dark to find some warmer clothes, and spent the rest of the night sitting by the fire.
The next morning we paddled out in a thick fog. 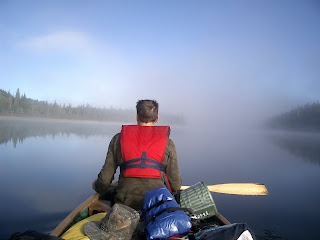