This was the latest I had ever been into the interior. The last week of October brings with it short days and very cool nights. Dad was a little reluctant to head into the interior this late in the year given the short days and normally rainy weather you chance having this time of year. Dad asked his brother uncle Pete (2004 Trip attendee) to join in the trip and in was determined that a short trip would be the best thing this time around. We planned on staying on Rock lake and I had done some site investigation in years past that had me wanting to stay on one of the mainland sites along the east shore of the lake. Dad and uncle Pete decided to take a small steel boat on this trip and though reluctant to agree with their choice I figured why not, at least they where going to go in with me. I on the other hand chose my dad's square back fiberglass canoe. I loaded up my gear and paddled solo to the site from the access point. I am not in favour of any motor boats in the park but I knew that if I pushed the issue too much dad and uncle Pete wouldn't be coming along and I would be going solo. 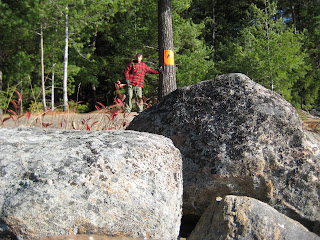 The site we chose had a large rock face running along the East side. This was kind of neat because our camp fire tended to reflect off the rock and light up the entire site in the evening. As in the past, tent placement is key when camping with snoreres!! I thought I had the right spot for my tent but after the first night it bacame very clear that the rock face that reflected the fire light so well also echoed the bear like snoring coming from both dad and Uncle Pete's tents right into mine. Lesson learned from this is to take along a cheap pair of foam ear plugs when camping with two old men that snore like nothing I have ever heard before in my life! 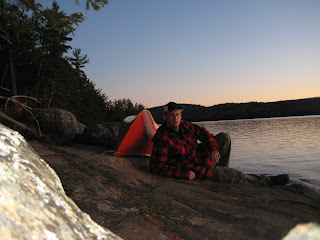 George Castanza eat your heart out!!
The weather for most of the trip was overcast but we did have a couple clear sunsets to take some nice pictures. The temperature was -1 deg C by day and -3 deg C by night fall. We all had enough clothes and mostly just enjoyed each others company for the weekend around the camp fire. Dad and Uncle Pete talked about old times and I just sat back and listened to stories of their lives growing up and camping as kids. I know I got the camping bug from my parents and my love for Algonquin Park came from memories of my very first trip into the interior back when I was 8 years old. We talked about our first trip into Pen Lake with mom, dad brother Blake and myself. Though we didn't make a habbit of interior camping right away after that first trip I believe the seed was truly planted. 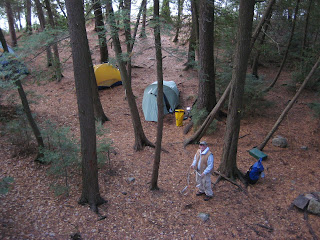 View of site from rock ledge along the east side of the site.
I took some time to enjoy the lake by myself this trip. The lake was empty of campers and I had never paddled down towards the dam into Galeairy Lake so I headed out one morning and just paddled the East shore meandering in and out of all the little bays and coves hugging the shoreline. I stopped and checked out three or four sites along the way for future trips. I got within about 200' of the dam and the light rain I had endured thus far became a heavy down pour so I decided to return to the camp site. One cool feature in this end of Rock Lake is a rock face protruding out of the water and rising up about 100' or so. I took one good picture of this and posted it below.
I find it amazing how each trip into the park fuels my desire to return. I found myself sitting around the fire drinking a hot coffee after dinner and looking at my Chrismar map trying to plan my our next trip into the park.
I find nothing helps pass the Winter months faster than sitting around the kitchen table talking with my brother Blake about a trip to embark on come ice out in May year after year. It is really great to have other peoples trip logs available online to help plan future trips.
We decided that an interior campsite on Rock lake would be the best choice for this trip.
Our Rock Lake site was S/W facing but the prevailing winds held off so it turned out to be a good choice this time around. 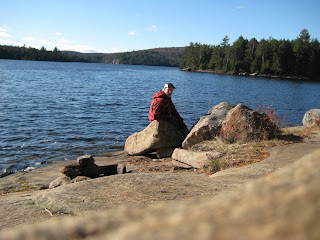 The shoreline had a great flat rock landing for putting in and out. 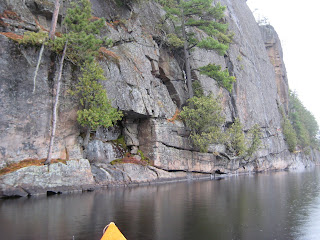 The rock wall down the shoreline from our site. 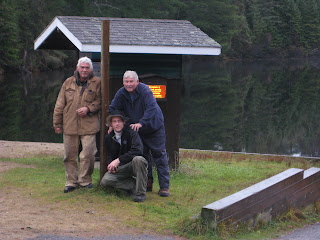 The three of us at the access point when we were heading home. 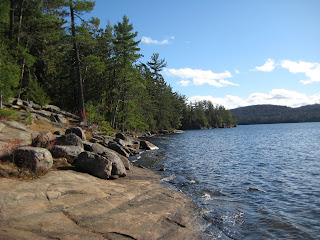 A great shot down the east shoreline from the put in at our site. 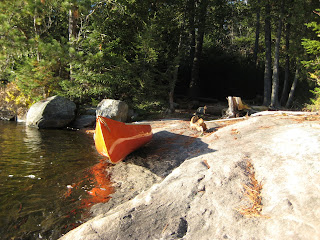 A picture of a site further South along the East shoreline. 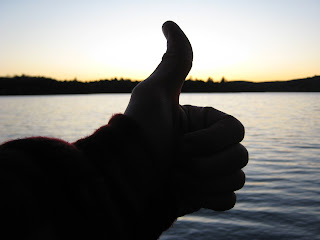 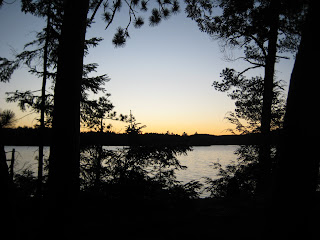 Thumbs up to the great sunset!! 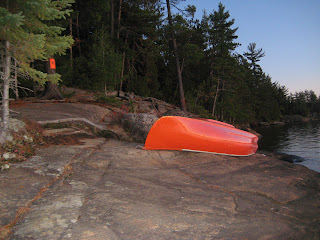 My favourite picture of this trip, to me it kinda just says it all!
at October 30, 2009