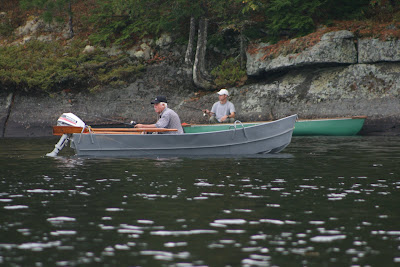 This picture is of Dad and Grant fishing in the small channel between Rose and Jean islands. Dad brought up his small steel boat this trip since we were staying of Rock Lake. Normally it is canoes only but this trip was an exception given the party size and the lake we chose to stay on. 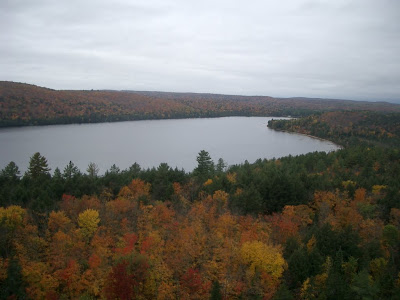 The group took a day trip over the the Booth's Rock Trail. If the sun would have came out from behind the clouds this would have been a great picture. The climb to the lookout was not too bad because the trail has stairs in spots to to make it easier for kids and seniors to enjoy the view. The bay on the left of the picture is the Rock Lake campground area. 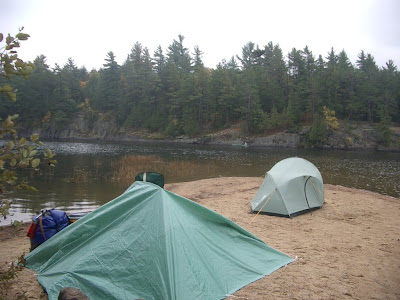 This is a closeup of two of our tents on the sand. Jean island is off in the distance and Grant is trying his luck at fishing along the rocky shoreline. 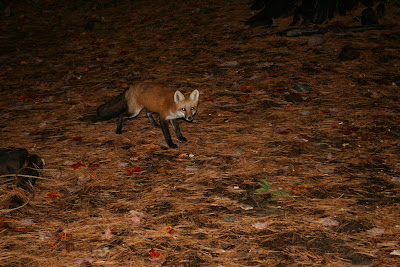 Our first night camping this trip was exciting. We were all gathered around the camp fire when suddenly out of the darkness from behind our camp came this Fox. We all took pictures of this fearless animal but this shot turned out to be the best one. The Fox was a bit jumpy but it appeared more hungry than anything else. The island isn't very big, we thought maybe he came over in the winter when the lake was frozen and just didn't get back t the main land before the ice went out. Who knows maybe Fox just like to swim? 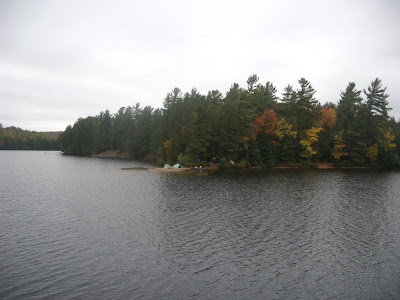 Rose Island site on Rock Lake interior October 2007
This site was nothing special but had a sandy beach that protruded about 100' into the lake. We set up our tents on the sand point. I had never camped on sand like this in Algonquin interior before. We had some rain over the weekend but it quickly drained away beneath the sand.
at October 26, 2007