This trip was out of Source Lake which was our first trip from this access point. We started our trip from the West gate where we obtained our permit. The office staff Kevin was a great help and to make things even better the office was open a hour earlier than we expected. Permit in hand and with great antisipation we headed off down hwy 60 enroute to access point #7 (Source lake). We arrived at the access road which was well marked and was a colourful road with what remained of the fall colours on the trees. The access had plenty of parking and the putin was great as well. The dock at the putin was still covered in the morning frost and I had to remind myself that slipping on the frost and falling either on the dock or in the lake at this point of the trip wouldn't be a good thing. With this in mind extra care was taken to load our gear and ourselves into the 16' Alchemist Myth. Alast we were off on another Algonquin adventure.

Source lake was easily crossed and the first takeout was also nice and sandy. The first portage was a 550m long easily hiked trip into Bruce Lake. We took some time at the start of this portage to figure out how we would proceed with portages this trip. Blake would be the pack and paddle guy and I took the canoe and lifejackets. I decided to utilize a good sized fanny pack this trip to lighten the load in our pack for Blake. I was able to load the fanny pack up with first aid kit, tackle box, some portage snacks, my head light, camera and many other small items. It worked well and made easy access for many items that I would use frequently on this trip.

Bruce Lake was the point at which the skies started to look a bit dark and the wind started to pick up. We stopped briefly at the only site on the lake just out of curiousity. The site would be a nice place to stay for a one nighter if someone was short on time but wanted to experiance backcountry. We crossed Bruce and started off on the 920m portage into Raven lake. This portage brought us through some low lands and some rolling hills and each section provided something differant to take in.

Raven lake was a long narrow lake and was also easily crossed. We spent more and more time looking back at the skies behind us as they grew increasingly dark. Nevertheless we pushed on and hoped for the best.

The next portage was a 550m into Owl lake.
The Owl lake portage was very slippery and presented some log bridges that with wet leaves and frost became hazardous to say the least. Near the end of the portage we encountered two moose along the left side of the trail. I lifted the bow of the canoe and turned to catch a glimpse and just as I did they both ran off up the adjacent hill.

Owl lake was another small lake and we crossed it quickly again keeping a close eye on the clouds moving in behind us to the South.

The last portage of the day was a 1320m into Linda lake. The portage had many wet spots and the leaves made locating slippery roots almost impossible. We arrived at Linda to find very dark clouds over the lake and lots of wind luckily at our backs. We put-in and headed for the site on the horn. The site was nice but was facing the oncoming wind and rain so we took some left over fire wood and headed down to the island site. We set camp and prepared for the rain which was surely coming. It is worth noting that tripping with my brother is really neat because the two of us have tripped together so often that we can set camp without really even talking to each other. We both no what we need to do to get it done and we just go into cruise control. Before long camp is set and we are ready to relax for a bit. Blake took along his Gopro camera and videod making camp in time laps mode.  Blake the photographer didnt take along his good gear this trip so for the most part I took stills with a small point and shoot Cannon hense the lack of quality in my shots. I just wasnt able to convince Blake to pack in his heavier camera gear. He now regrets this descision. 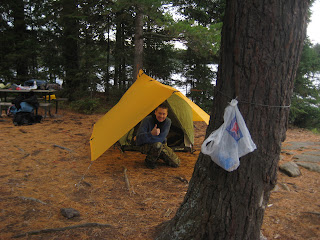 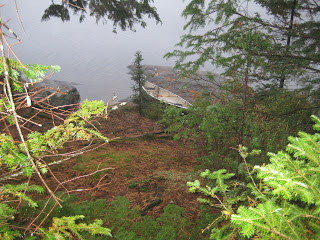 Picture of island site take out
On Sunday we got up and were surprised that the over night rain had stopped. We headed out to investigate a site just up the lake from us. I paddled there at first light solo and enjoyed the peace and quiet the early morning had to offer. I returned to camp and picked up Blake and we headed back to the site to explore our options of moving and trying it out. Blake was not in favour of moving so we decided to stay put.

That day we also headed into Iris lake to check out the lone site on that lake. The 870m portage into Iris is one of the more difficult portages I have ever done. Iris is a strange lake with an eerie feel to it. The site was large and surrounded with new growth spruce trees. The site boarders Iris creek and is scenic and would be a great place for a weekend trip to get away from it all. After exploring the shoreline of Iris lake we reached the portage back into Linda and the skies opened up. We portaged back in the heavy rain and returned to camp in the down pour. I dropped off Blake at camp and grabbed my fishing gear. I set out with antisipation of catching some SM Bass. I trolled accross the lake in the down pour and sort of just zoned out and took in the moment. I landed three good sized SM Bass on a spinner. The second and third fish which were the larger two felt like snags at first but soon I realized a fish was on the line. The first Bass jumped clear out of the water twice before I managed to get it into the boat. I was excited about this because I have returned home so many times without so much as a bite. To top it off I actually had pictures to prove my curse was over! 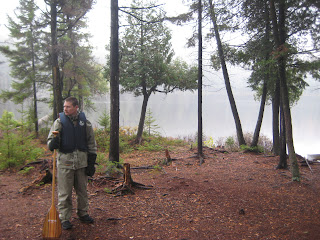 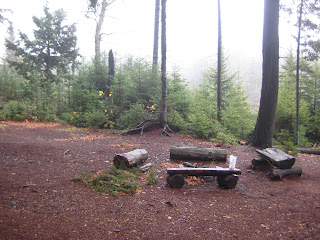 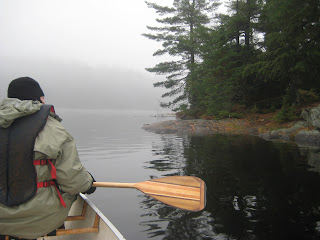 Just heading into camp from one of our outings

Sunday evening we attempted to get a fire going but due to the fact the canoe was what we were using to cover the wood from the rain and we had been out exploring all day the wood was dripping wet. We attempted to use all the fire starting trick we had learned from watching Survivor Man to no avail! We spent much of the remainder of Sunday wandering around the island and looking at the terrain it had to offer. We turned in early and cooked up dinner on the camp stove under the tarp just outside the tent 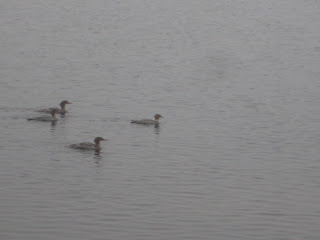 
Monday we were up at 06:00am and started by packing the gear that was in the tent. By 07:30 we were all packed up and we couldn't help but notice the extreme wind coming from the Southwest. We loaded up the canoe with our pack and gear and headed on down the lake. It was a difficult paddle to say the least. We made quick work of the first portage also the longest one. By the time we reached owl lake the skies opened up and we paddled the next two lakes in the pouring rain. We reached the start of the portage to Bruce lake and I realized that my fishing pole bag was missing. Blake had taken it off the top of the pack to get out his rain gear so it was sitting somehwere two lakes back on a portage. The good thing is that my pole was not in it as I had decided to keep it handy in case we stopped on the way out to cast a few times.

At this point the sun was peaking out from between the odd cloud. Blake had videod a salemander on one of the portages which was a first for both of us in the park.

We reached the putin on Source from Bruce portage and looked out to the South to see large white caps and screaming wind. We started off on course and we aimed for the point directly across from the small bay. The wind was gusting to over 50km/hr and at times we found ourselves going backwards even when padling as hard as we could. Blake contended with the odd wave coming over the bow and I attempted to stay our course. We rounded he point and made it into the protected cove at the access point.

To sum up this trip I would have to say it was a great trip and one to which we really got to push the limits of a our paddling and portaging skills. We learned a great deal about what we were both capable of and I believe we are stronger trippers because of it. Regardless of the poor weather, wind, rain and cold camping in AP interior is awesome no matter what mother nature throws at you. I find that heading out knowing the forecast is aweful allows you to put aside expectations and really just embrace the time in the park. I have more confidence than ever in my gear and really am glad I spent the little bit extra to get gear that can stand up the elements such as this. 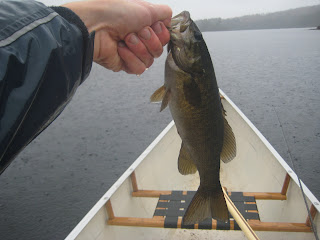 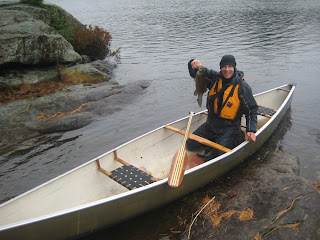 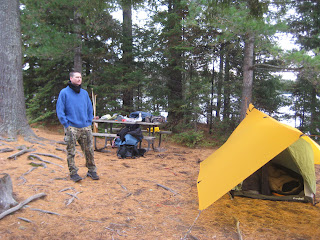 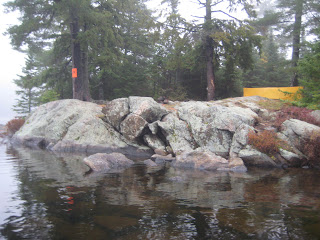 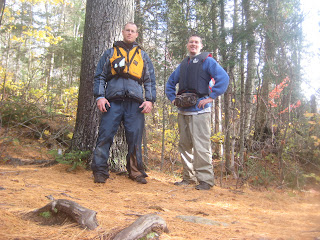 Blake and I just before heading back across Source to end the trip
at October 28, 2012