This trip was planned as a base camp trip with a focus on wildlife viewing and fishing. We headed up from a friends cottage near Fenlon Falls leaving the cottage at 04:30 we arrived at the Shall Lake access office about 07:15. The office staff had the permit on file and we were soon off across the road to the access put-in. 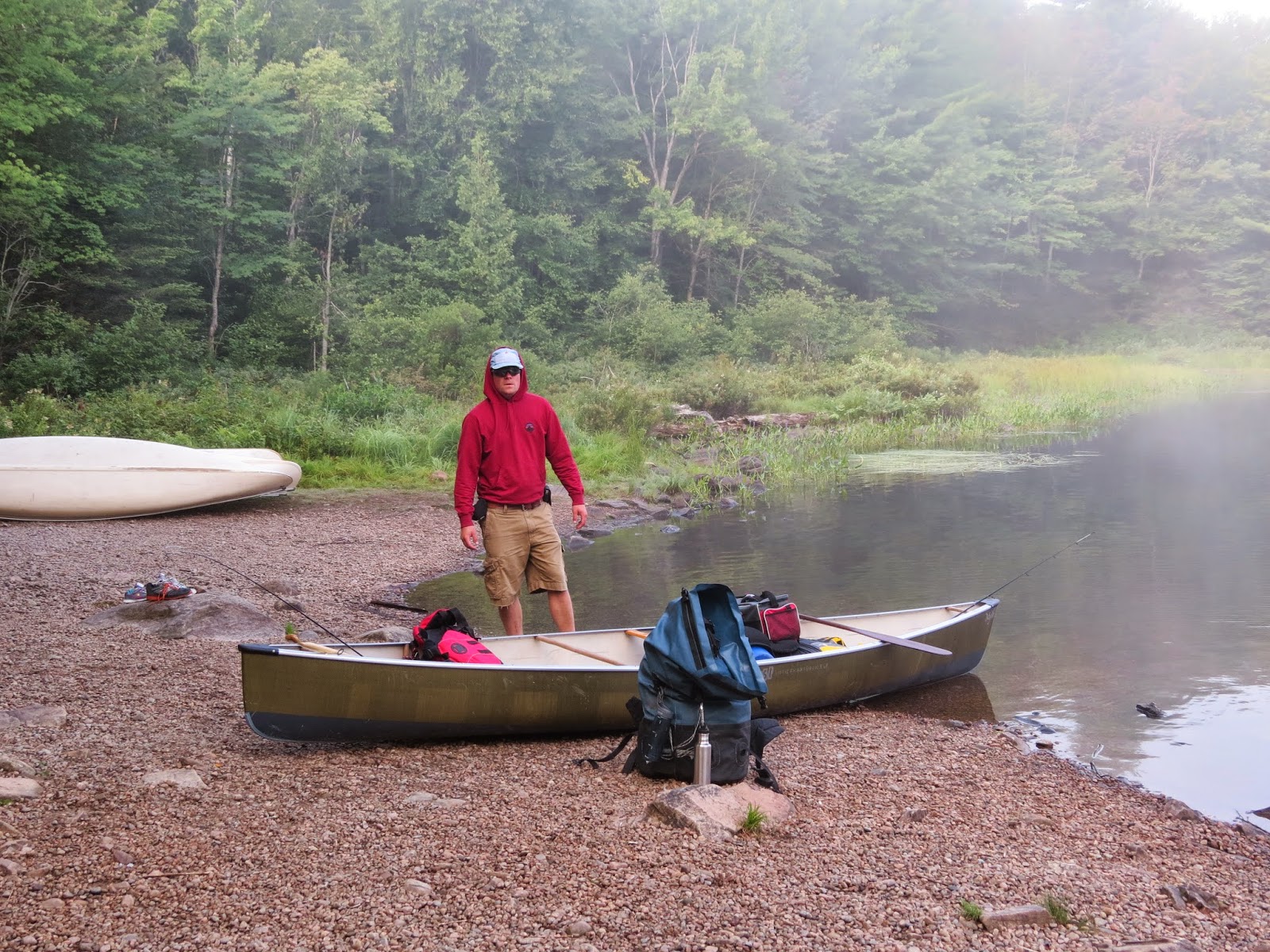 The weather was really great and soon the sun burned the morning fog off of Farm lake and we found our way to the 90m portage to Kitty lake. Though some reports said it was runnable our carbon fiber canoe would have been no match for the rocks in the swift. we made quick work of the portage and were soon on our way up Kitty lake. We were able to capture a glimpse of a large Blue Heron sitting in a white pine tree just meters into out paddle up Kitty lake. The lake had a few campers on it and we said hello to some as we paddled past. We made it to the portage to Booth and stopped for a snack and to toss our lines out for a few casts with out much luck just a few small bass. Two other canoes started to approach from Kitty so we made quick work of the portage to get out of their way. We loaded up the canoe and shoved off into Booth Lake. First impressions were that this was a beautiful lake and we couldn't wait to get out and explore all that it had to offer. 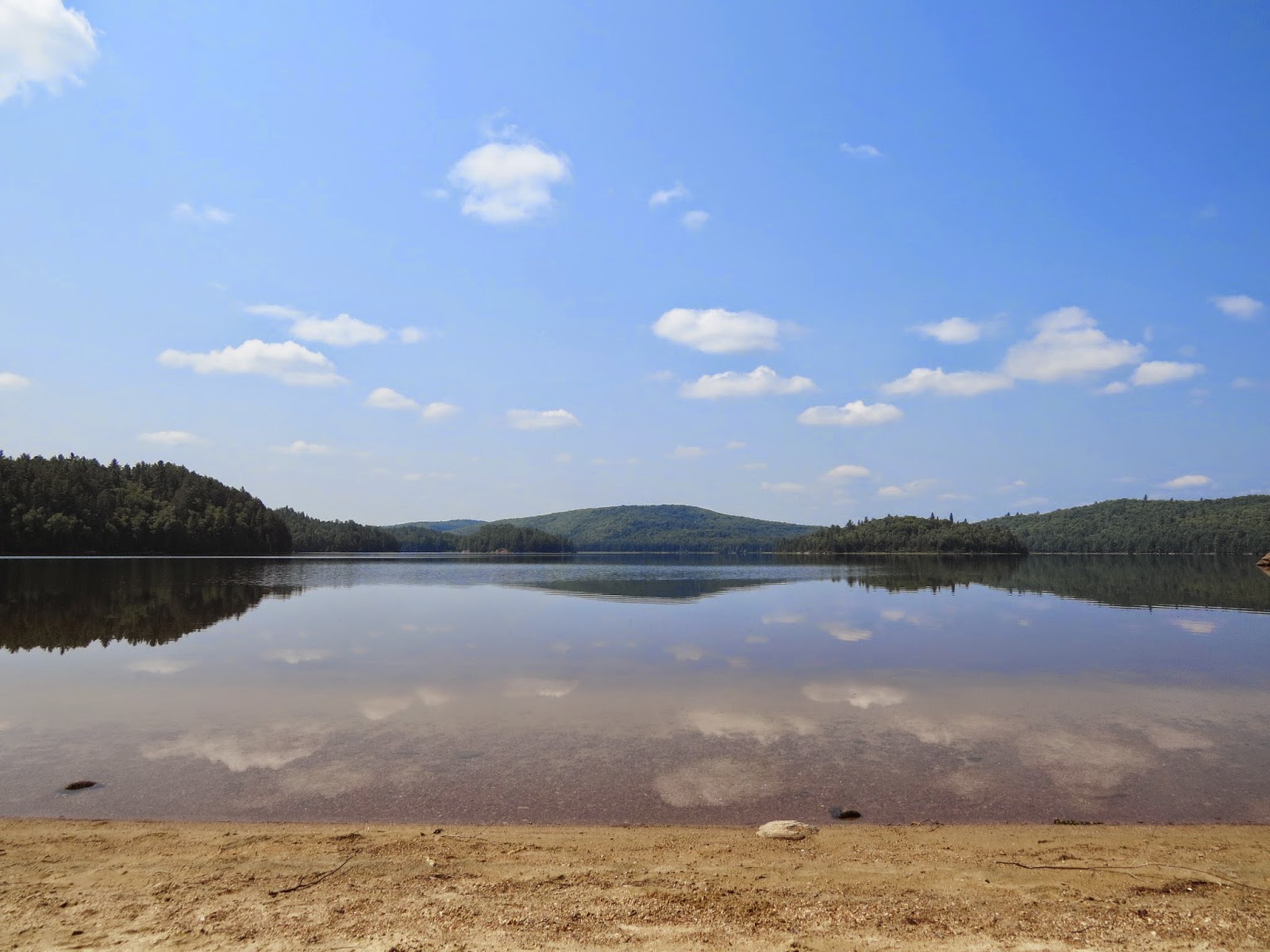 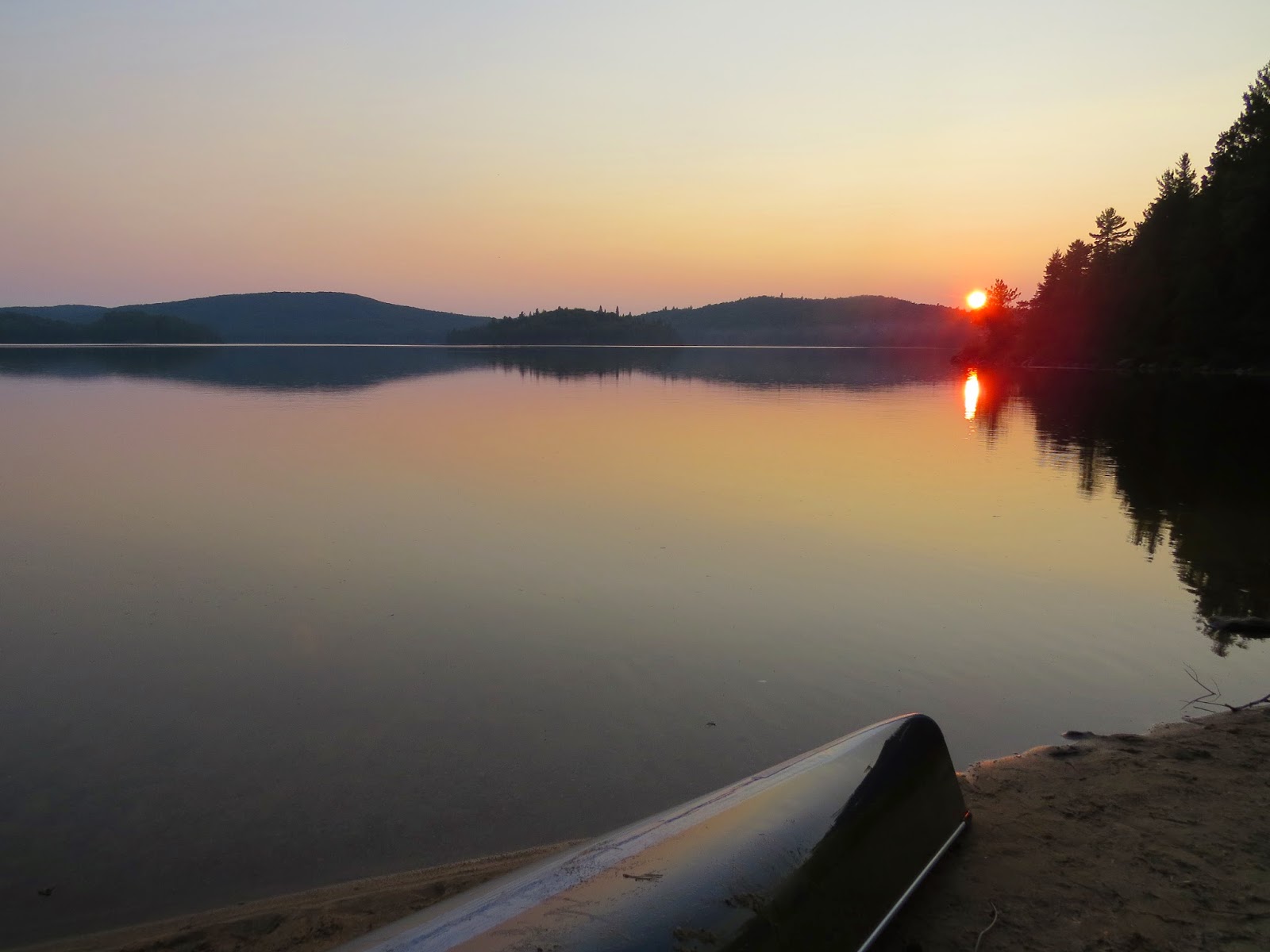 Sunset on our beach site

The heat of the morning was intense and the lack of sleep I had the night before at the cottage was catching up with me. We ended up choosing the second site on the right hand shoreline as it was a nice beach site and I was ready to at very least make camp for the day. 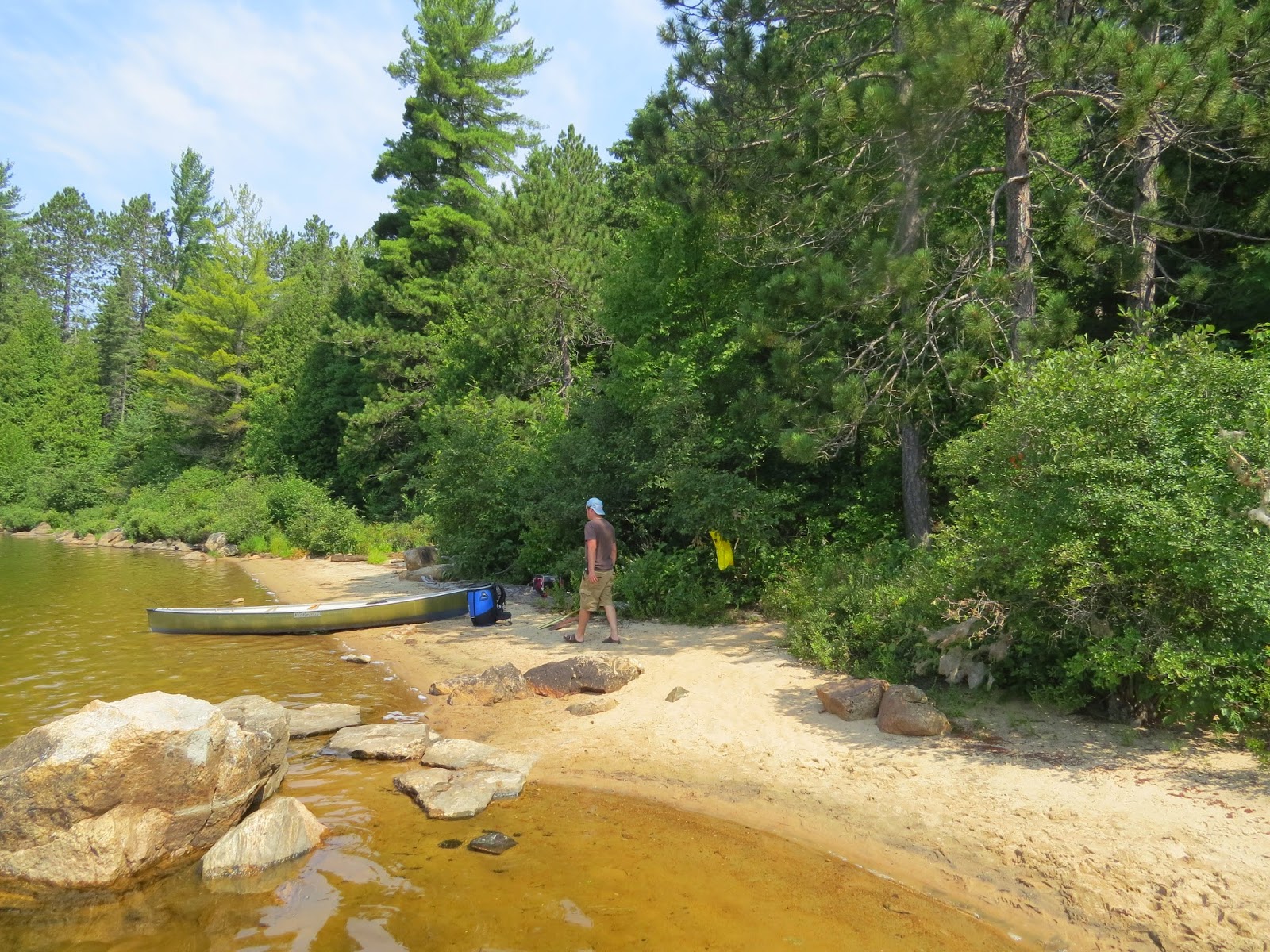 Unloading our gear at 1st site of the trip

After a couple hours we set off to try some fishing and paddled up to Tattler lake to see what the cabin looked like. The lake was fairly busy and the wind was so calm we could hear people on the other shoreline talking. The fishing was pretty fun and in my opinion pretty good for me. Though the fish were plentiful we released them all as we had other perishable food to eat back at camp. 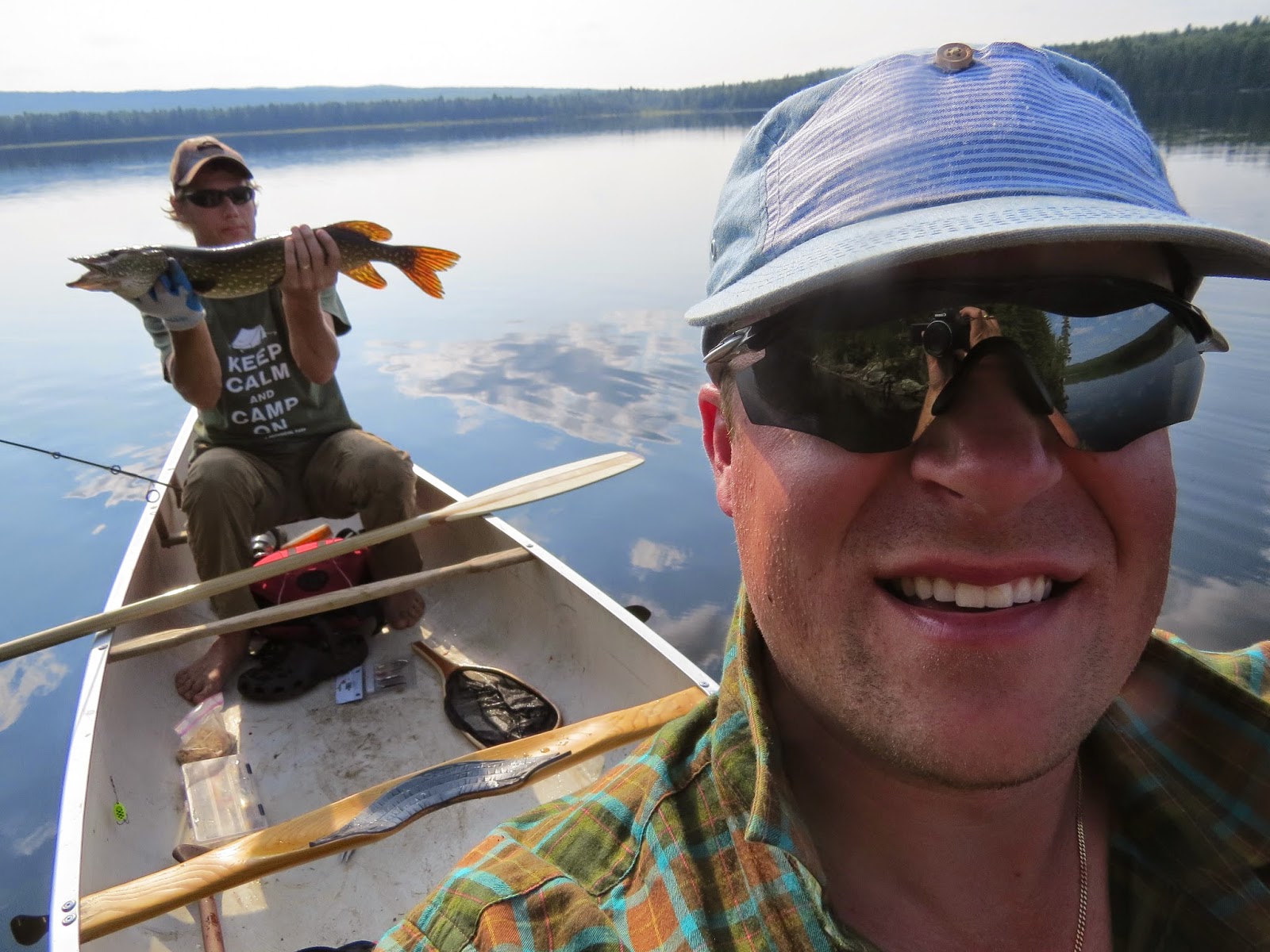 A Pike caught on Booth shortly after we arrived


On Sunday morning we were up before 06:00 and after a quick coffee and some oatmeal we headed out to fish just after 06:30am and I landed my biggest catch of the trip and the biggest Pike I have caught to date. 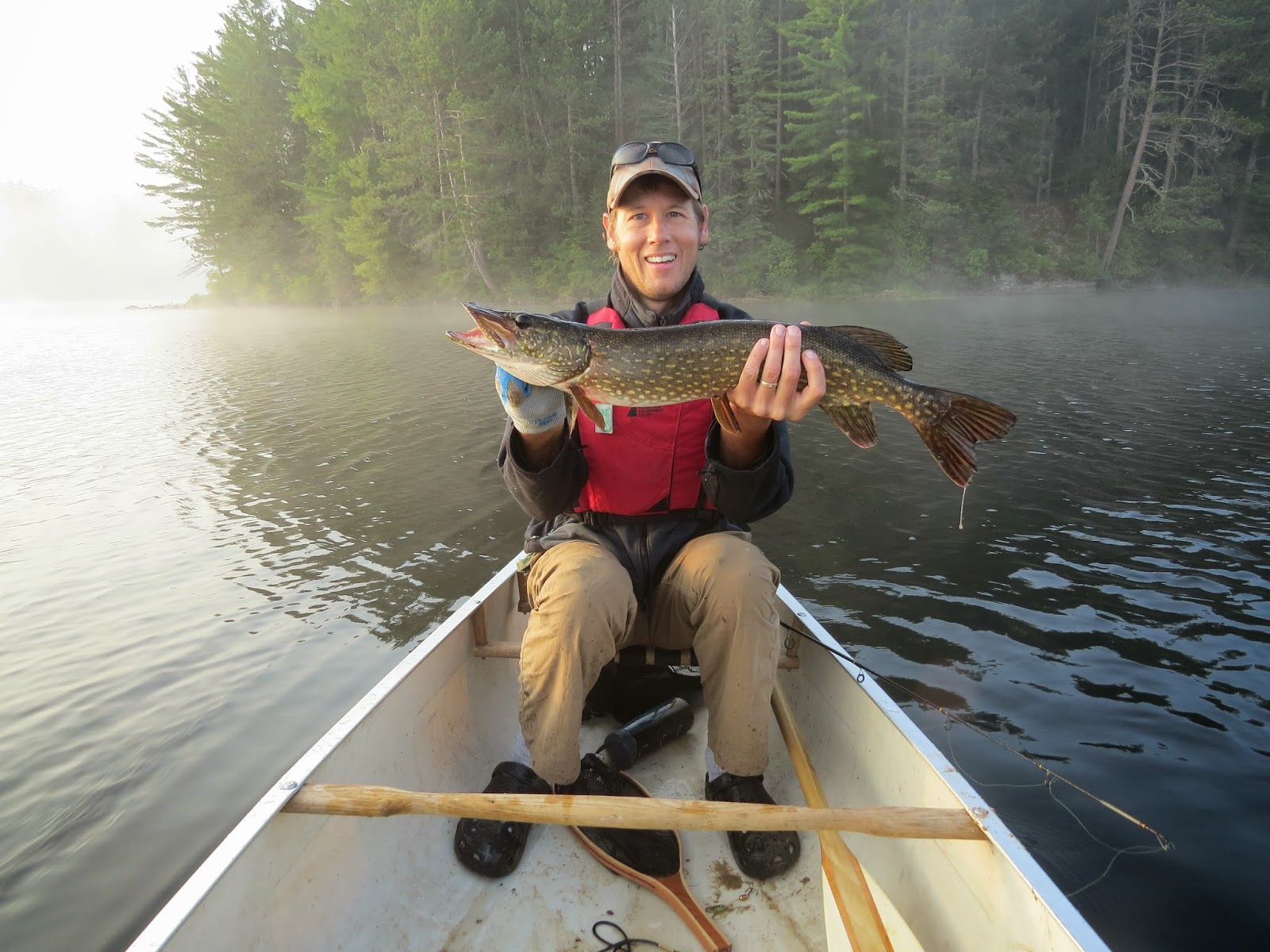 After my catch we decided to head up McCarthy Creek to check out Mole lake and try to catch a photo of some moose along the way. We didn't see any moose on this trek up the creek but we followed a beaver up the creek for  a few meters and I was able to get a picture of it swimming. We followed along behind the beaver at a safe distance not to spook it and it made its way to this beaver house. 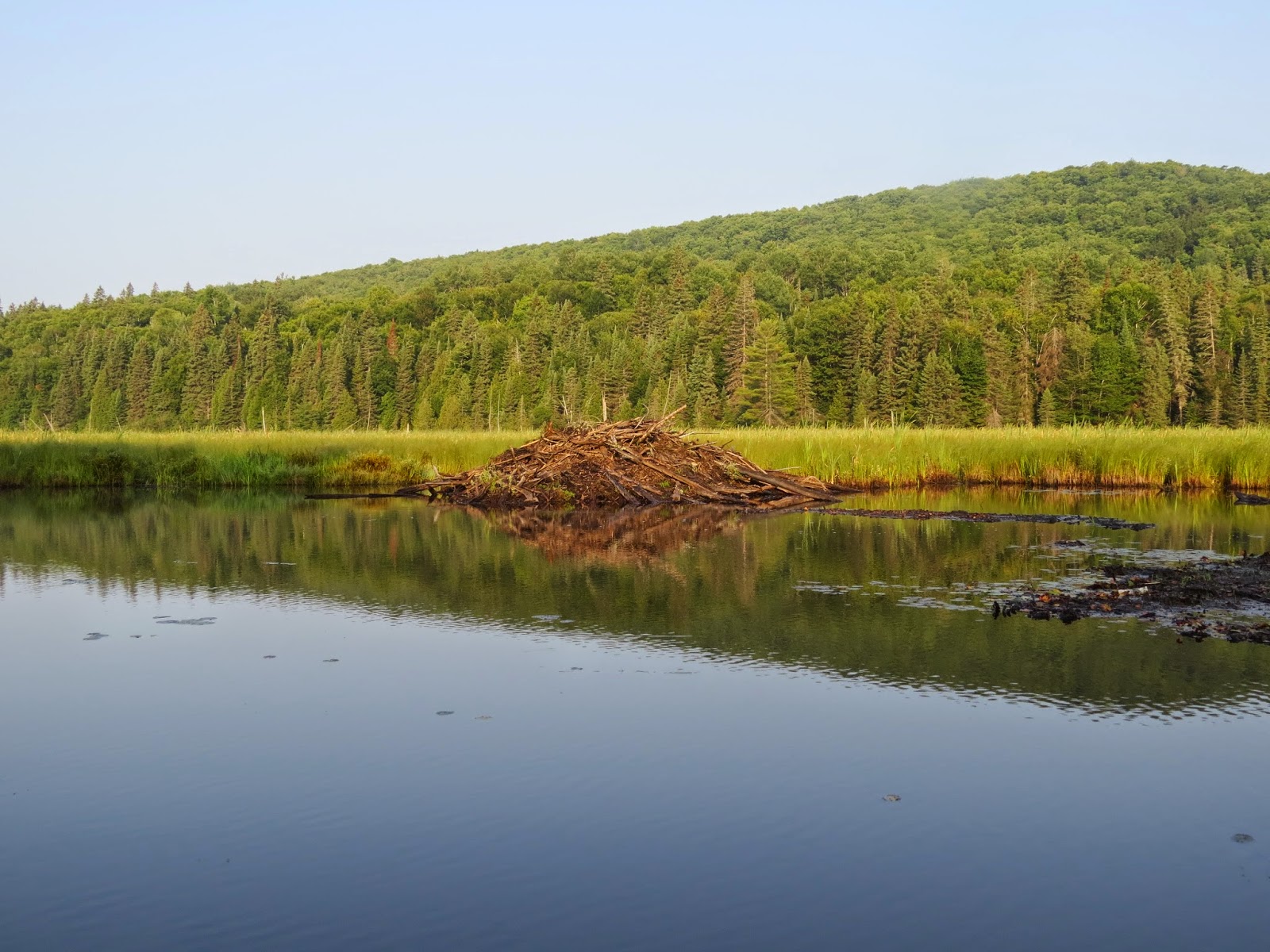 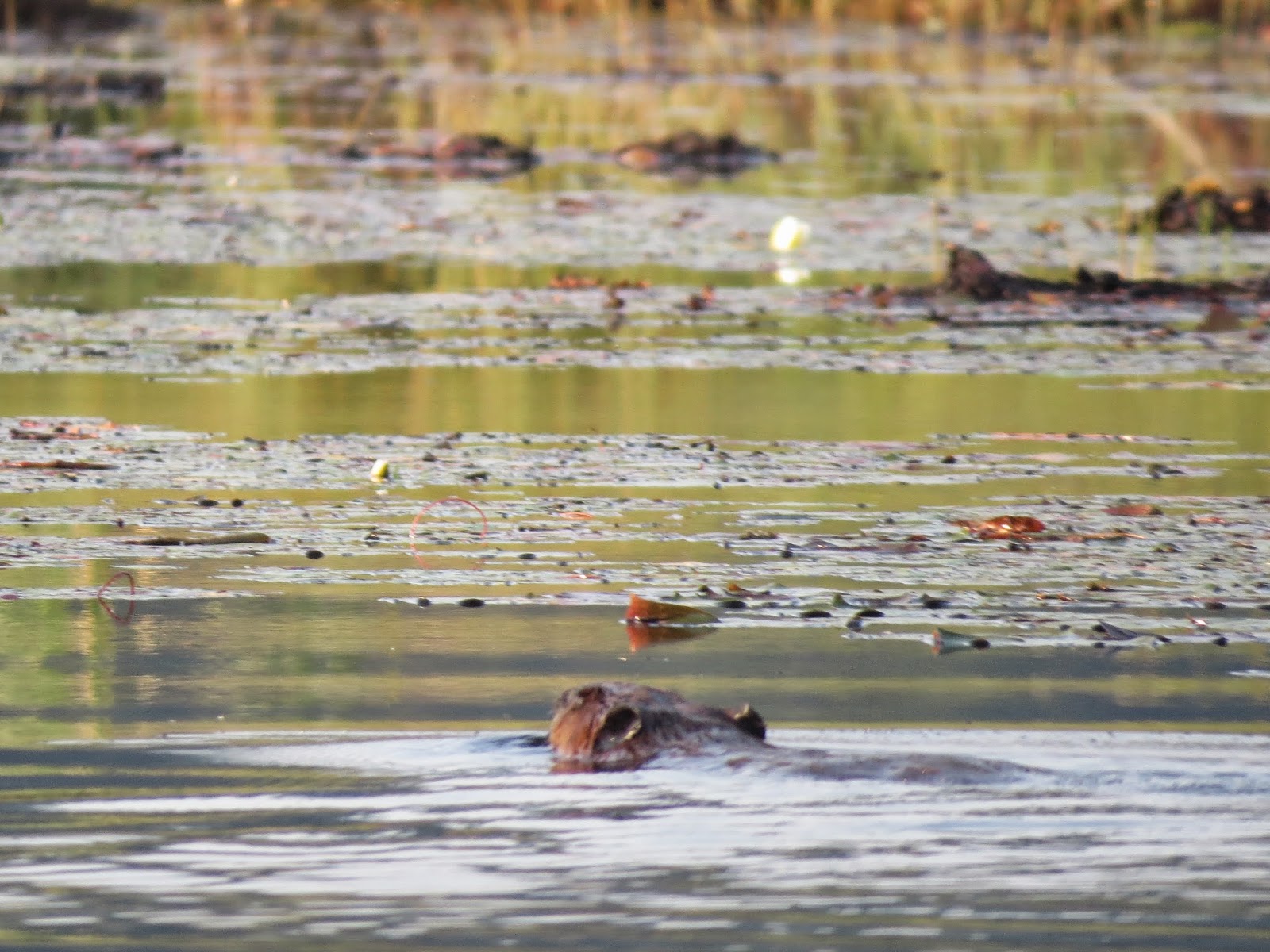 Beaver we followed up the creek


Mole lake was a very quiet lake we checked out both the sites on this lake. The one beside the Godda lake portage was very over grown and appeared to have not been used in many months. 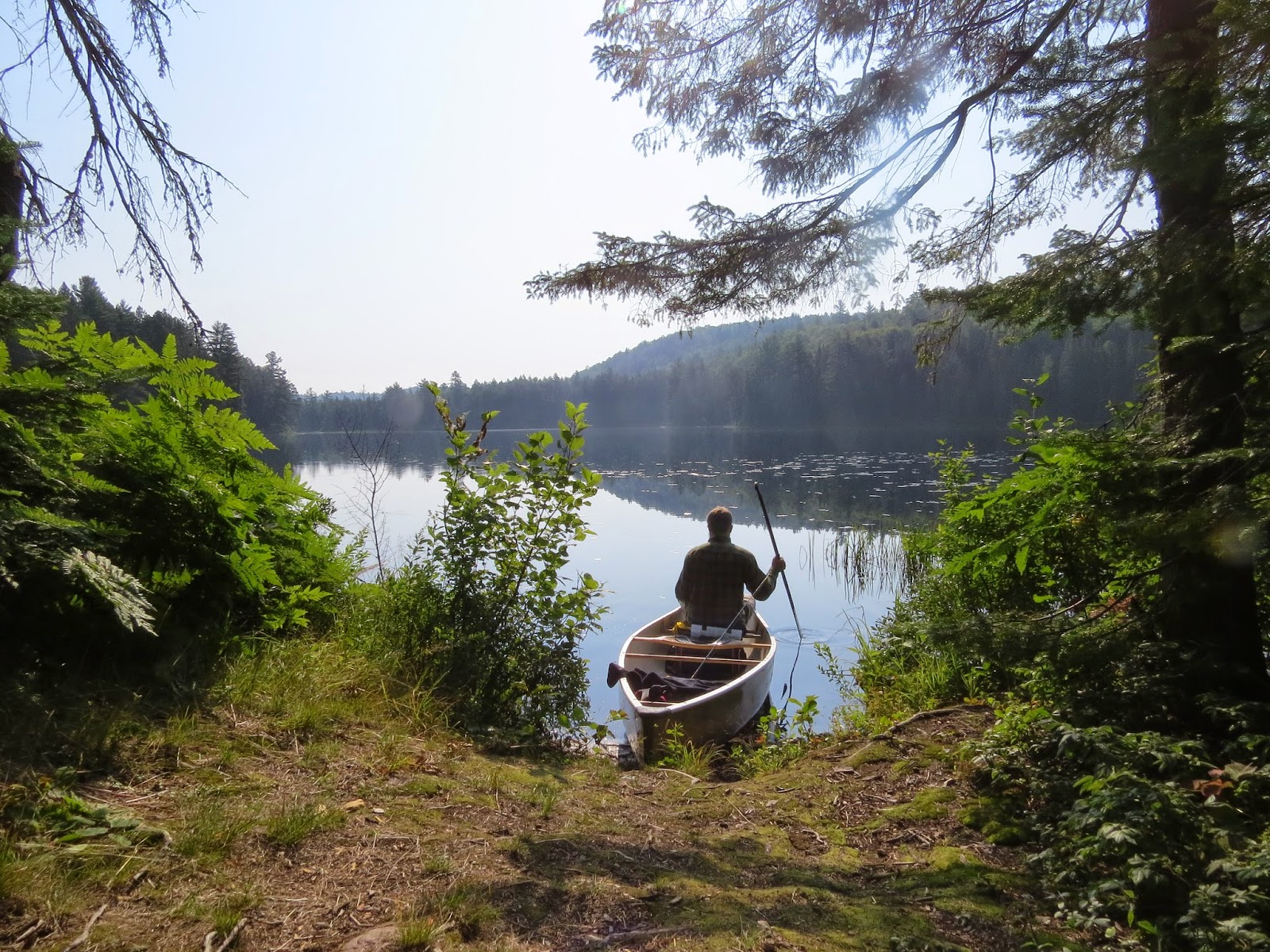 Mole to Godda portage takeout. Mole is a peaceful lake


I caught a pike on Mole and after a circumnavigation of the lake we headed back to Booth. We returned to camp had a bite to eat and decided to pack up and try another site on the lake just to experience more of what this lake has to offer. We cooled off one last time on our beach site and then set off the take our next site. We circled the Southern most island and chose the campsite in the narrows. This was a very big and open site and there were lots of locations to setup a tent. 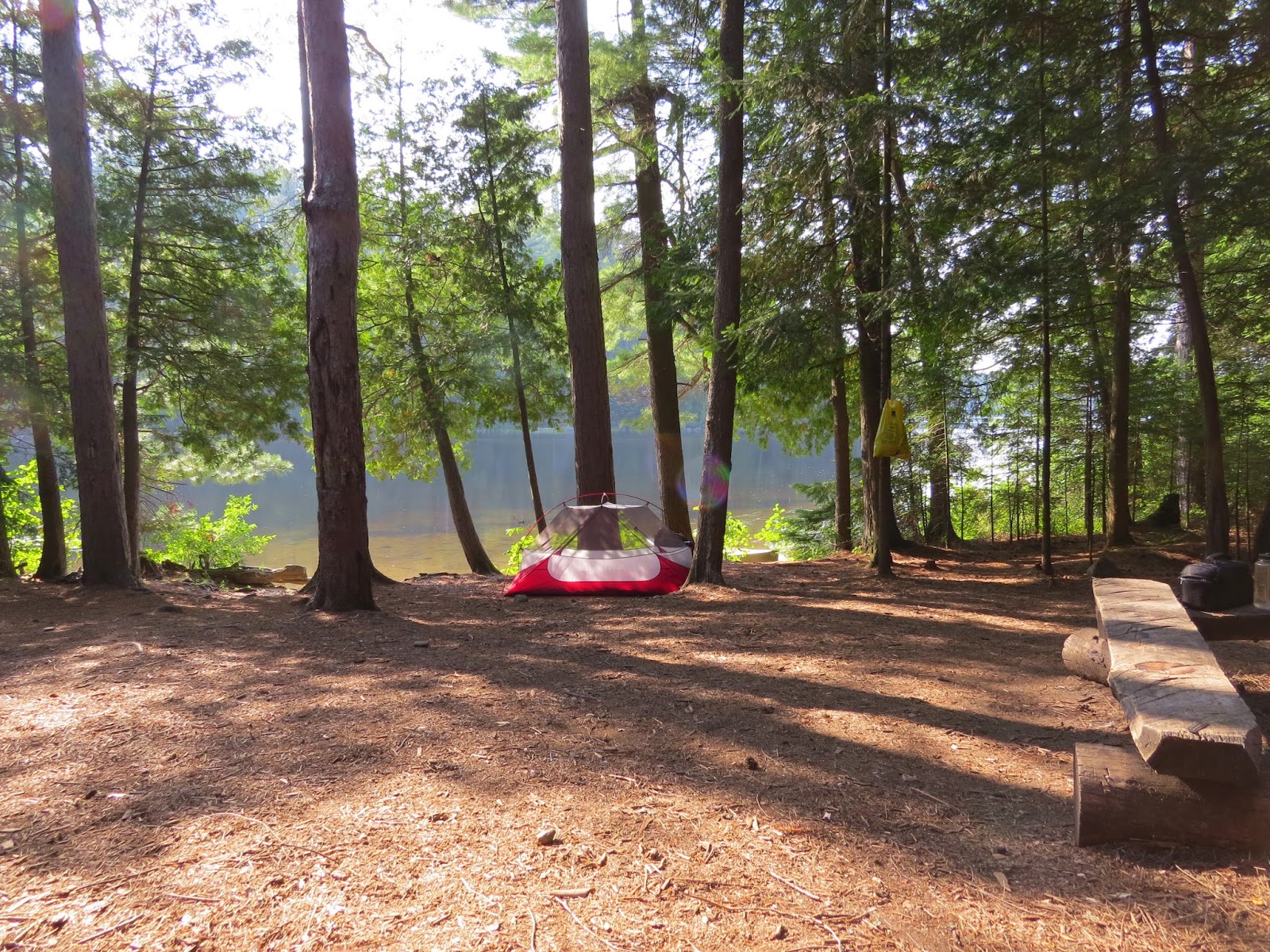 Our second site of the trip on South Island on Booth Our vessel beached along side our island site

We setup fairly quick and again set out to go fishing. The weather remained as calm as could be and made for great canoe fishing and traveling about on the lake. 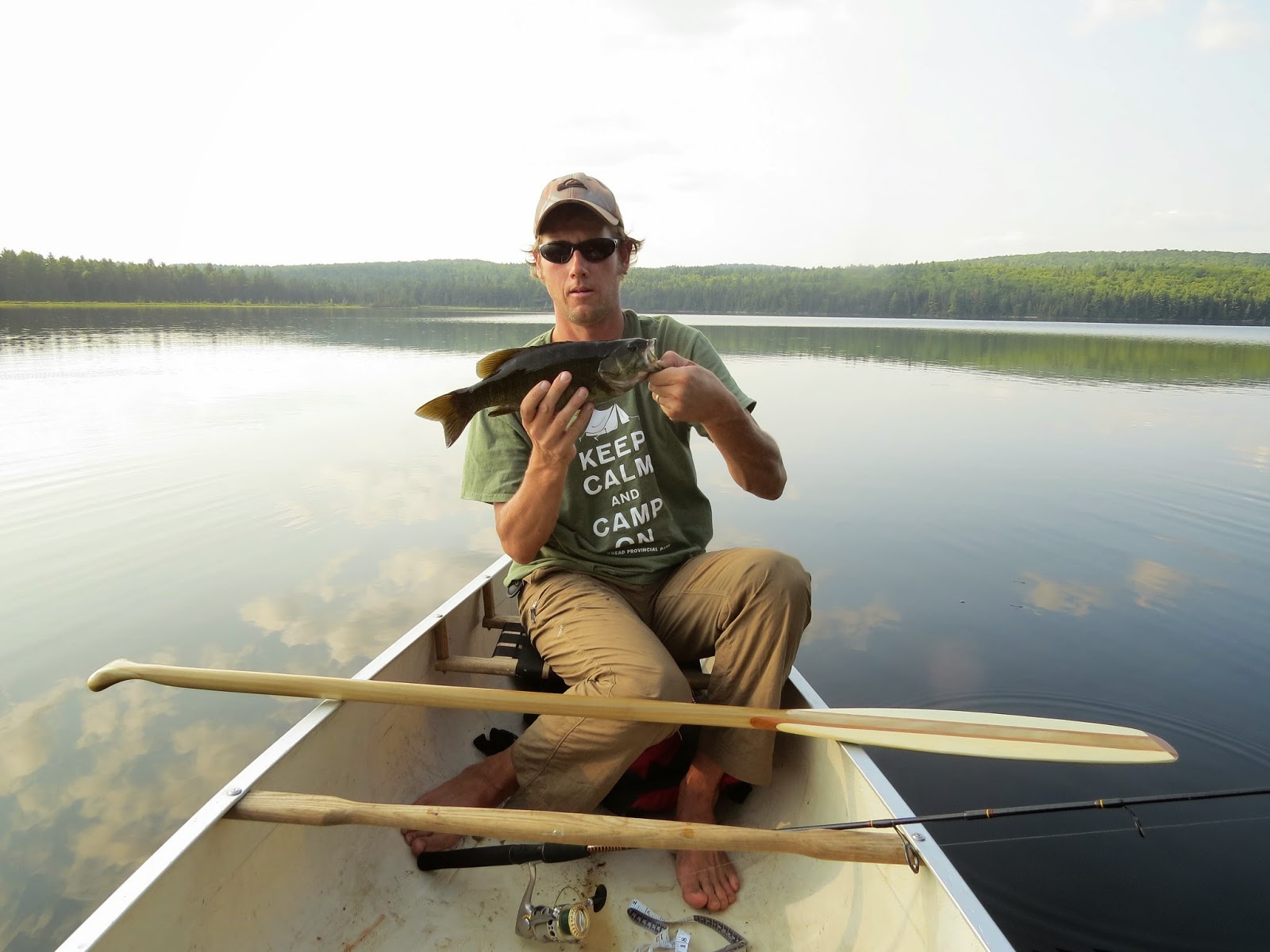 We decided on Sunday evening that Monday would be a good day to head to Godda lake. We developed our game plan and hit the hay for the night around 10pm. Monday morning at 05:55 I woke up and yelled over to the other tent for Mike to get up for a coffee. we packed a lunch and our fishing gear and headed to the Booth the Ryegrass portage. 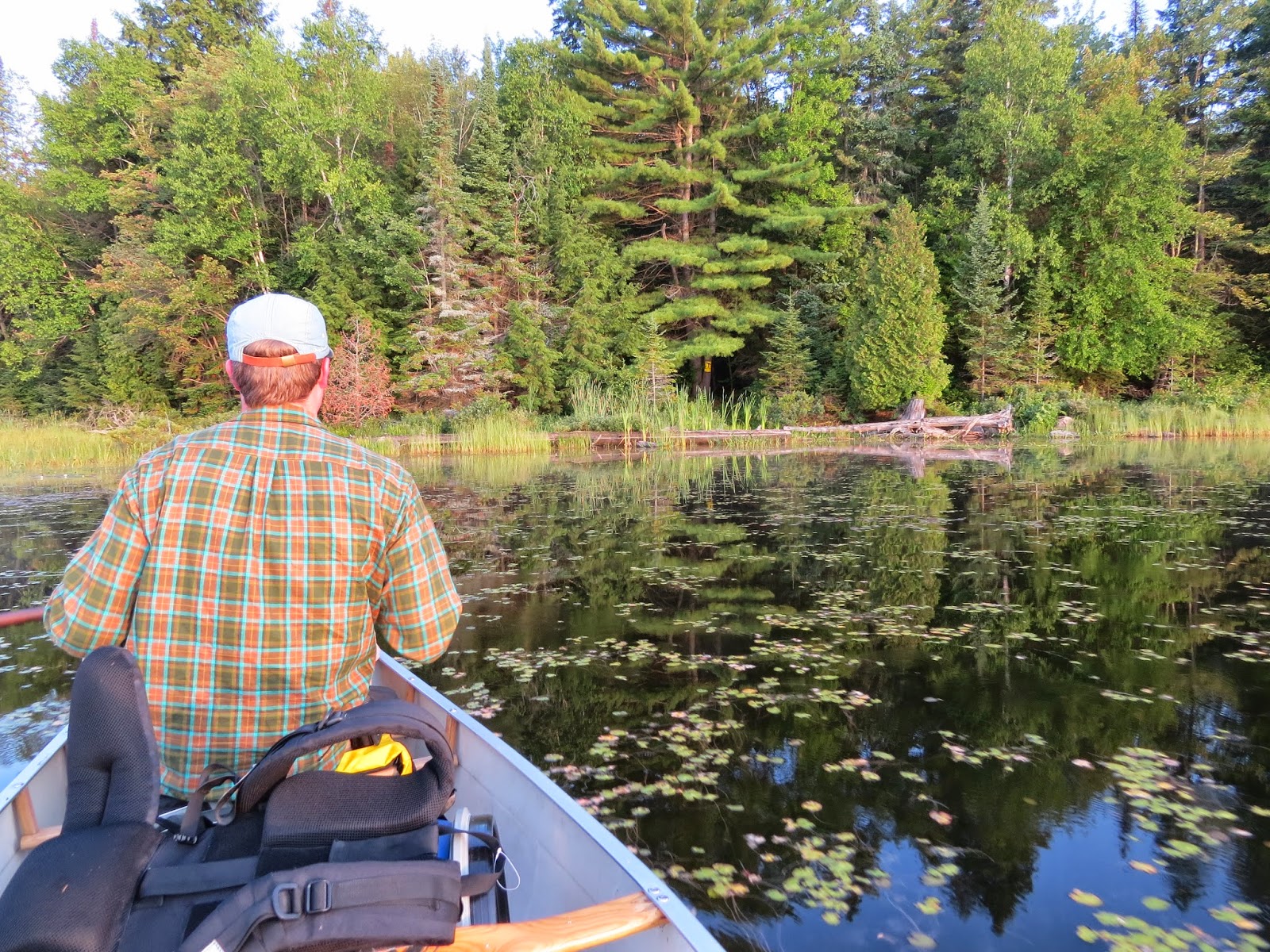 Approaching the takeout at Booth to Ryegrass portage 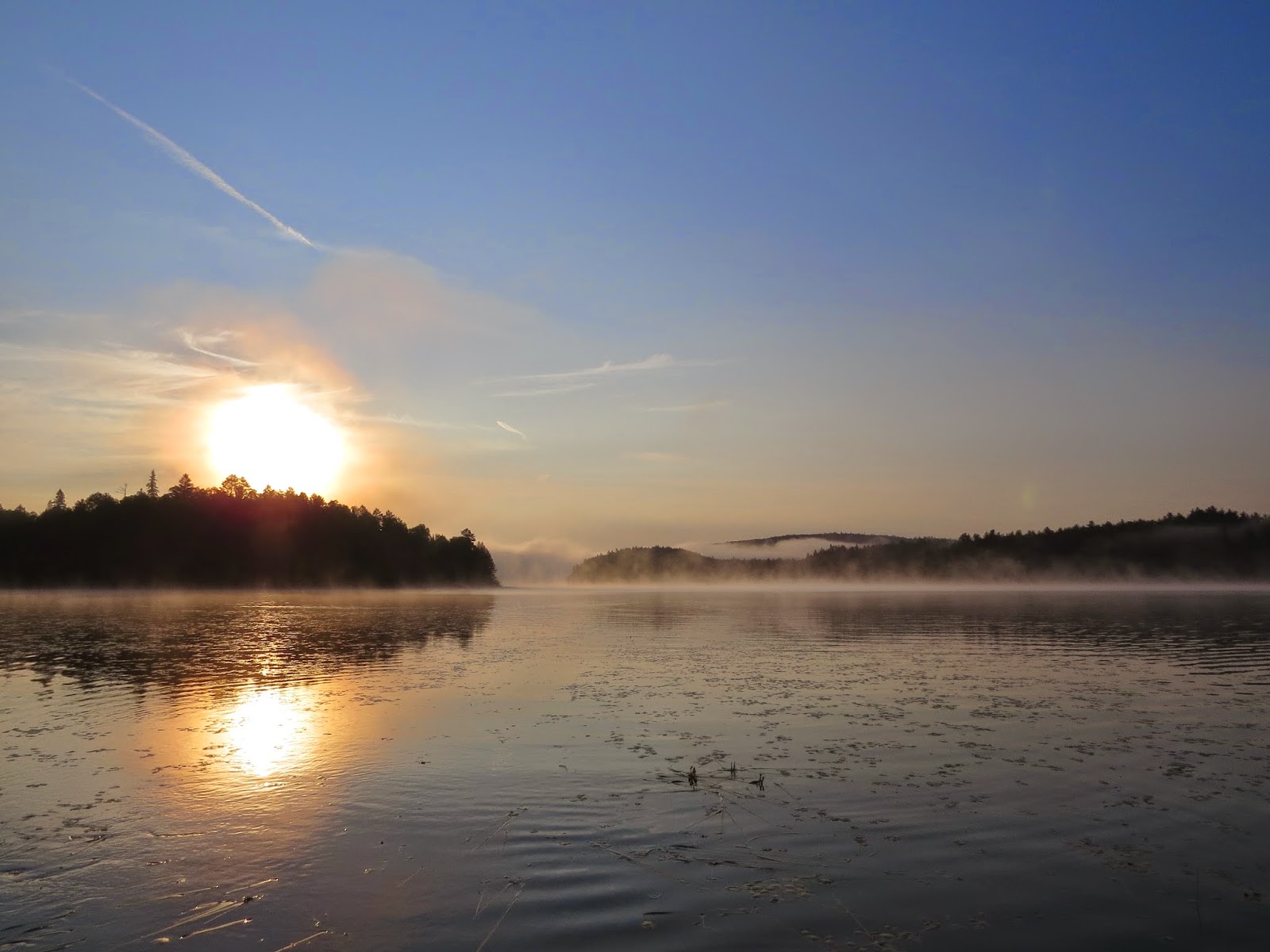 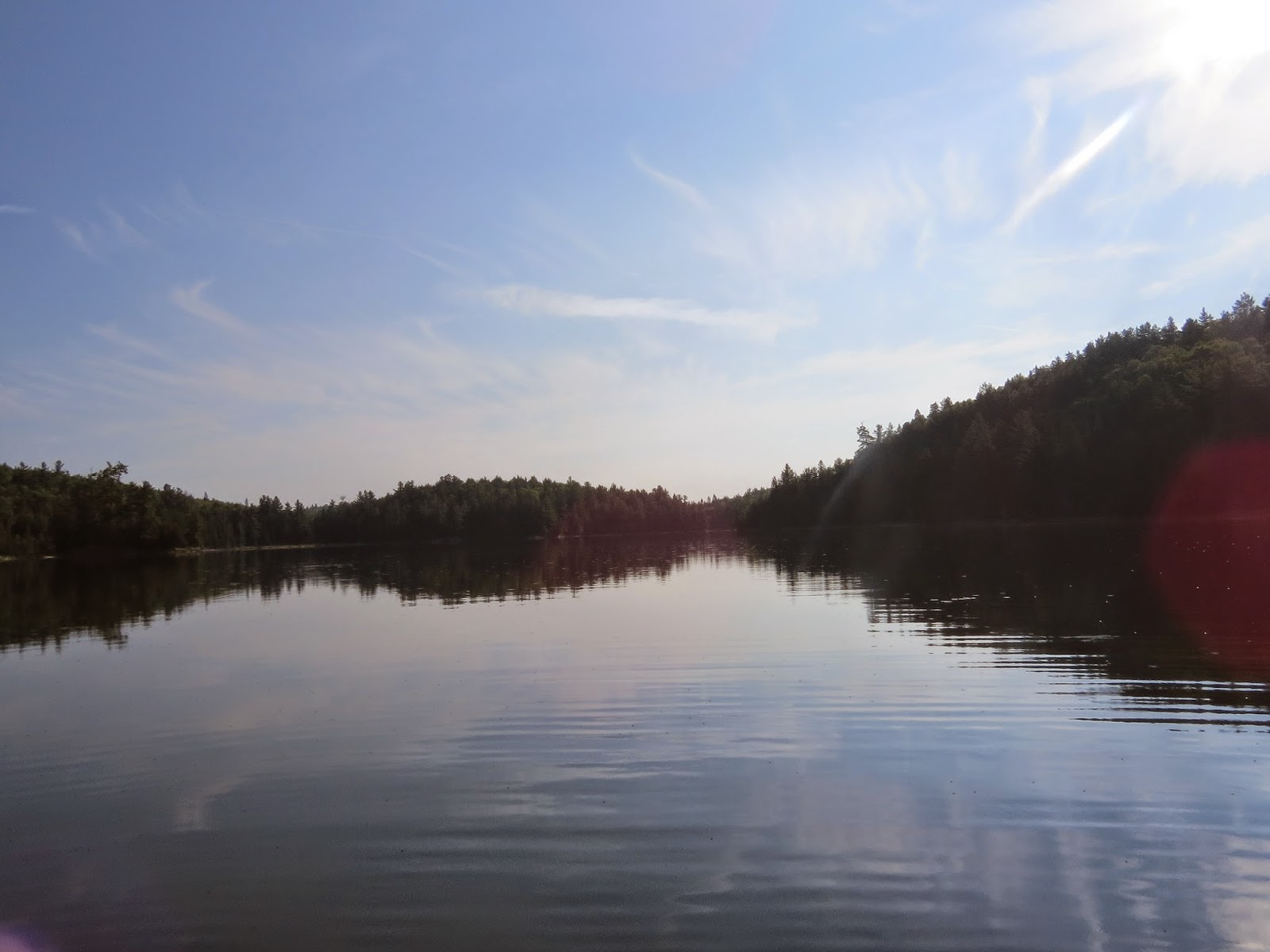 
The Rumly to Godda portage was more open than I expected but the 1350m proved to be a long one. I was able to single carry the canoe without a break which I was happy about. The mozzy's were bad on the portage so we made fast work of getting back into the canoe at the Godda end. The East end site was located beside the portage and didn't look like too bad of a site. A large rocky shoal stretched out into the lake from the portage and looked like a great spot for some fishing. we spent some time paddling around and looking at the large rocks in this area of the lake but didn't get as much as a bite. We headed down the lake and made our way to the North shoreline. As we neared the small creek that lead to Blake lake we heard something up ahead on the shoreline. I grabbed my camera and signaled to Mike to slowly paddle to the shore about 100' away. We both expected to see a moose but to our surprise a bear cub rolled out of the brush and into the shallow water on the shore. Just then the bushes rustled again and a large female bear stood up and stared us down with her nose in the air and her ears perked up. I was able to get this one half decent shot before she escorted her cub back into the dense bush. 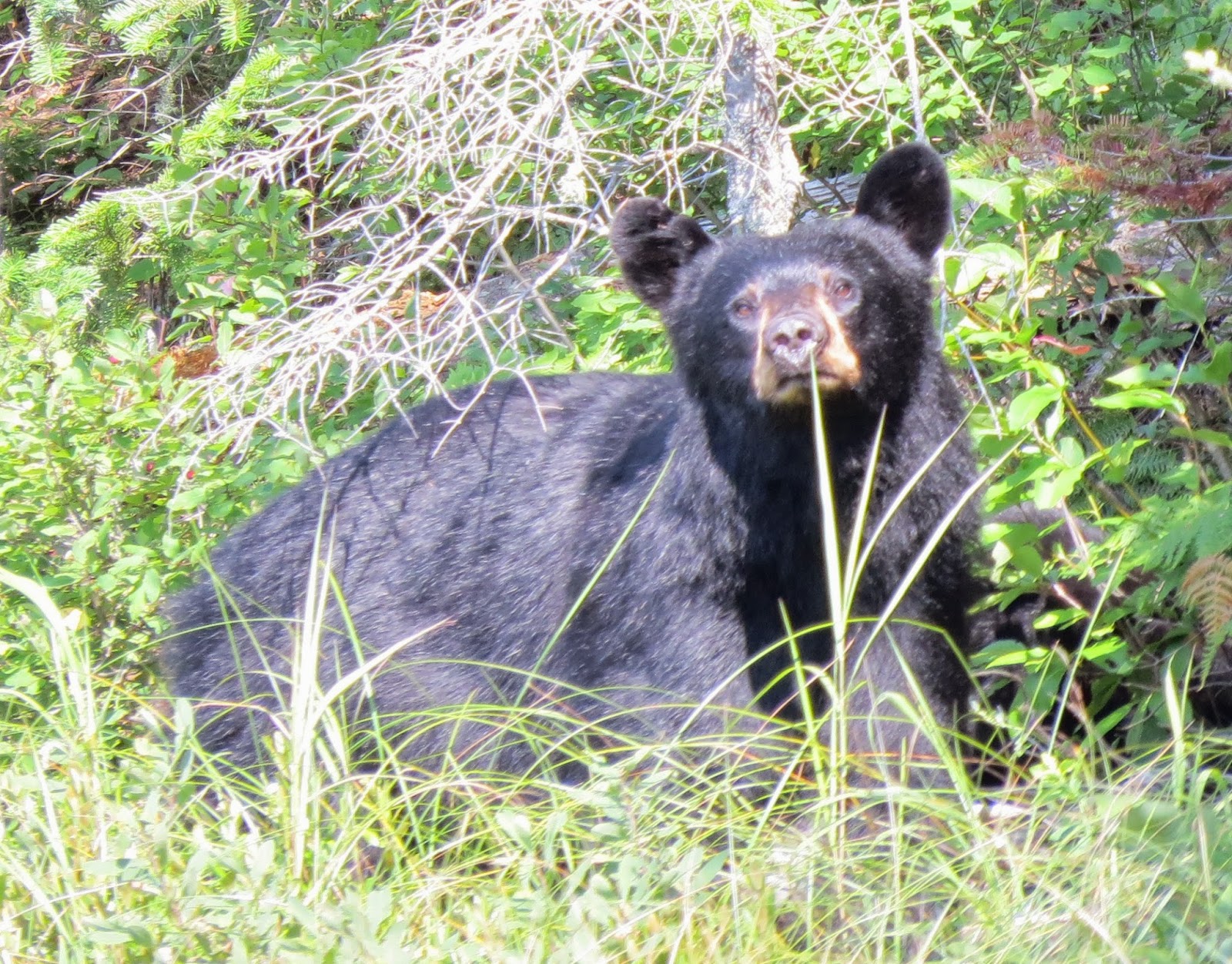 Mother Bear on Godda lake with her cub hiding behind her left shoulder
We attempted to travel to Blake lake but the small stream was too shallow and narrow to navigate without getting out and walking through the marshy area right beside where we had just seen the bears. We decided to stop for a break at the West end campsite. This is a great looking site that would be nice for a weekend trip stop over. 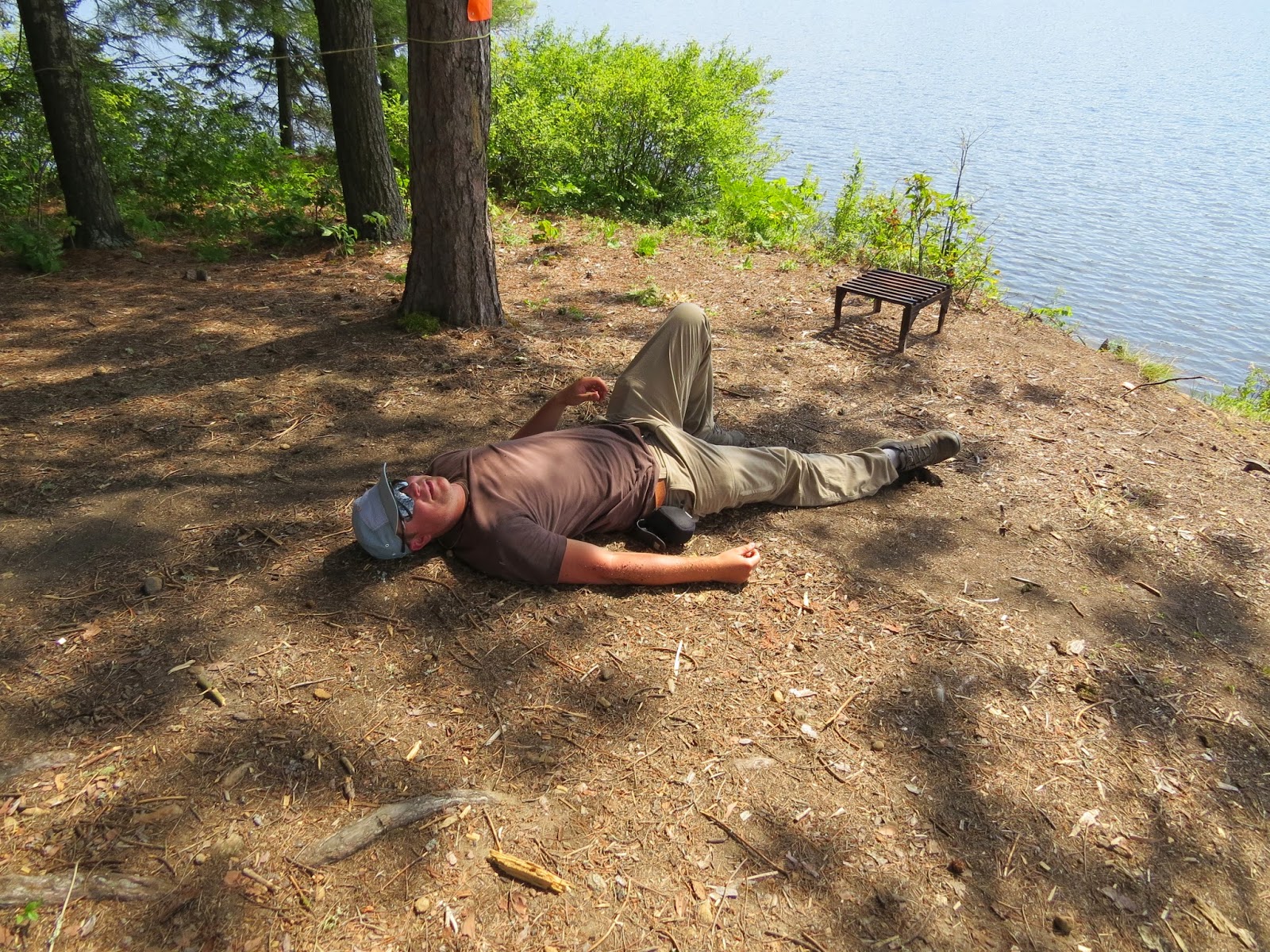 Mike taking a well needed break after a long morning of portaging and paddling .
We made our way back to Mole lake and then back through McCarthy creek towards our island site. Monday night we gathered some fire wood and discussed our plans for heading out the next morning back to the car. Once again I woke up before 06:00 but this time it was to the sound of rain on the tent fly. If it had to rain then this was the best day for it. Mike also got up and we both started packing up our tents and gear in the increasingly building rain and wind. Around 6:45 we were all packed up and headed off back towards the car. I packed away the camera for this trek and I am very glad that I made this call. By the time we reached the Portage to Kitty we were in a full on rain storm and the wind was directly in our faces and strong. I two tripped the first portage and once we got to the Farm lake portage I was prepared to one trip it. Farm lake was a very windy lake that morning and it was a pleasure to finally reach the creek approaching the takeout at the access. We made quick work of loading up the canoe and car and were off in a matter of 20 minutes. 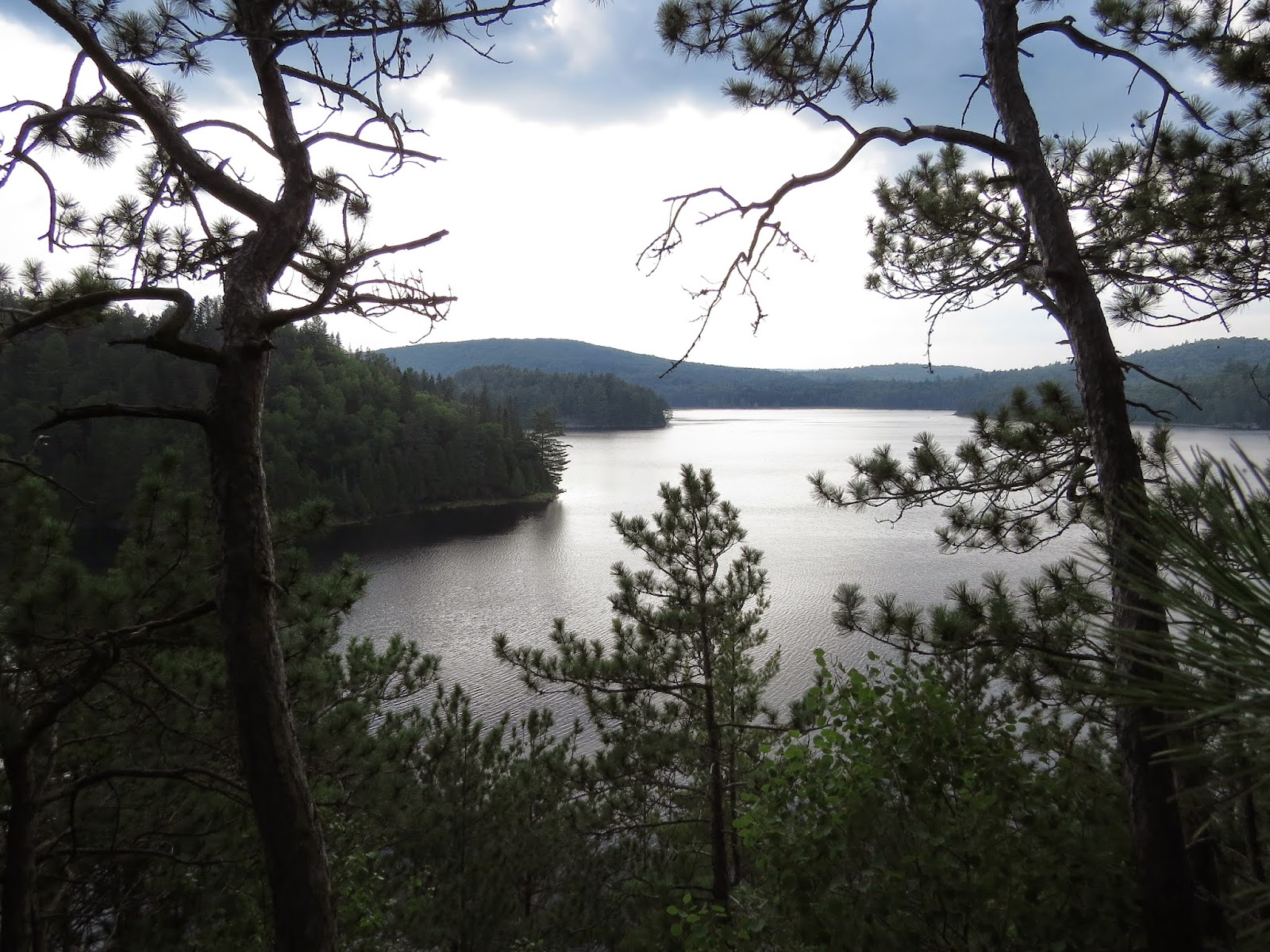 A view from on top of the rocky ridge in the middle of the island we were staying on
This was a very memorable trip and I look forward to making plans for another trip from this access point. The women at the counter in the permit office was very helpful and seemed to have the same passion for the park that we have.
at August 15, 2014