This was our 21st trip into the Algonquin interior in the last decade since we have been tracking our trips. This trip we wanted to try a new access point off the normal hwy 60 access points we had traveled over the last 10 years. The drive up seemed quick and the traffic was great. We arrived at the Kearney permit office about 15 minutes before it was scheduled to open. The staff noticed us in the parking lot and opened a few minutes early so we could be on our way. This was a nice way to start this trip. We had read lots about the varying conditions of the access road from the office to the actual put-in so we knew it could be bad. To our amazement other than a few pot holes and wash board sections it was pretty good and my car made it without issue. We were able to see one your moose in a clearing along the road into the park but we didn't have camera gear ready to catch a photo. Seeing as though the bugs were pretty bad we didn't expect to see many people this trip. We were surprised to see the parking lot at Magnetawan lake so full. Just as we started putting our gear out by the dock and unloading the car a large group of canoes rounded the corner from the Hambone portage and we had to move our gear over into the wooded area beside the dock to give the group the room they needed to safely exit the lake and load up.

Before to long we were on our way and Blake had his video equipment setup and ready to capture our trip. We were at the Hambone portage in minutes and one this we all noticed was how clear Magnetawan lake was. We made quick work on the 1st portage of the trip. The putt-in at Hambone end of the 1st portage was okay but given that we were 3 to the canoe it was a bit tricky to get to a spot where the canoe wasn't getting hung up on the bottom. Hambone too was a very clear lake. We set out around the South shore and as we rounded the corner and opened up into the main body of the lake I spotted a bald eagle flying out of the top of a large pine tree on the South shoreline. It flew out to the middle of the lake and circled around and then back into the tree tops. Blake was again not able to get a good picture of the great bird. After some ribbing and laughs for the failed attempt at a photo we paddled on. The wind had really picked up by this time and we made our way across the Hambone to Ralph Bice portage. We knew we were in for a rough ride on Ralph Bice and so we sat as low as we could in the canoe and headed out hugging the S/W shore. We went in behind the small islands and headed for the large island on the West shore with the one site on it. To our amaze it was vacant so we went ashore to investigate. It didn't take long to decide that this was it for us. We made camp and started gathering wood.

I set out for some fishing and explored the water around our island. I came across a young moose calf on the back side of the island. I went ashore and attempted to get a closer look for the moose but it must have made it over to the main land before I was able to track it down for a picture. We paddled over to David lake for a side trip and investigated the island site on this lake. This is a very nice clear lake and the island site is beautiful. This would make a great lake for a secluded weekend get away.

On day two I spent much of the day fishing and checking out camp sites on either side of Ralph Bice lake. This is a nice lake and the sites are very nice as well. I finally managed to land a Trout late in the afternoon and came to shore to fill out my survey paperwork and make dinner. This was only the second Trout I had caught in the park so I was very excited to say the least. Later after dinner I headed back out to try my luck for another Trout and within 20 minutes I landed another beautiful Trout. I measured and released this one to swim another day.

The next morning we packed up and made our way to Daisy lake for our 3rd and final night in the park for this trip. We crossed Ralph Bice again into the wind and soon we were at the Daisy lake portage. This portage was a bit longer than the others this trip and had many ups and downs but the weather was nice and the sun was out so it made for a great walk through the woods. We approached the Daisy lake end of the portage and loaded up the canoe. We were surprised to see so many canoes paddling by heading West on Daisy. we pulled out and started looking for a site. Concerned we would pass one up and then lose it to the canoes coming behind us we made extra sure we were passing on a site before heading on down the lake. We rounded the corner at the West end of the main body of the lake and took the last site on the left shore. The site had a good breeze to keep the bugs at bay.

We spent the afternoon exploring the site and I took a few cracks at catching fish with no luck to be had. That evening we finished up the rest of our food and spent time relaxing around the camp fire.

The next morning we packed up and headed back to the car. The portages were n eventful and we made a quick trip of it. Once back at the car it became clear that there was much less people in this part of the park then when we departed. 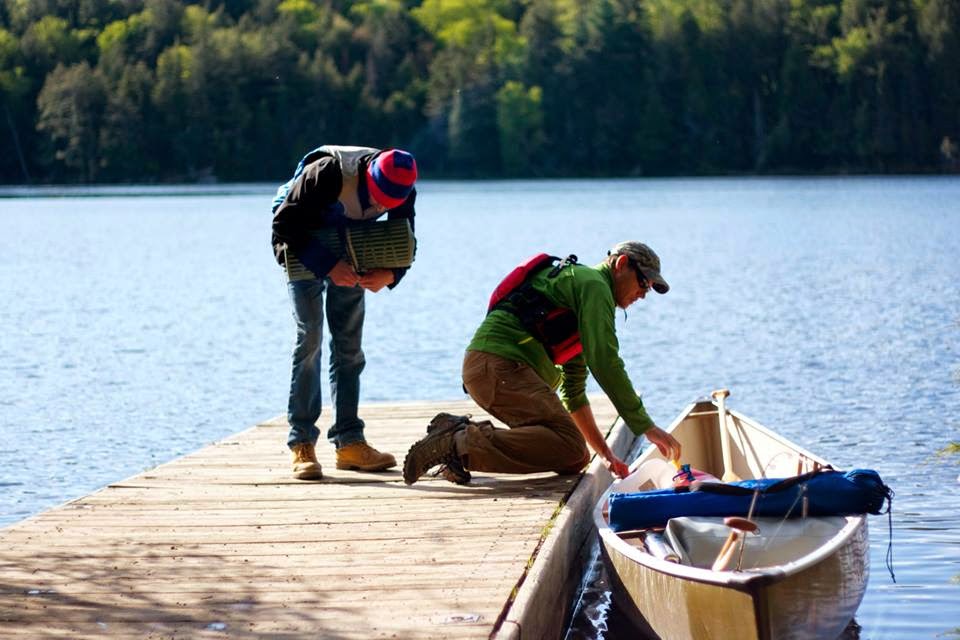 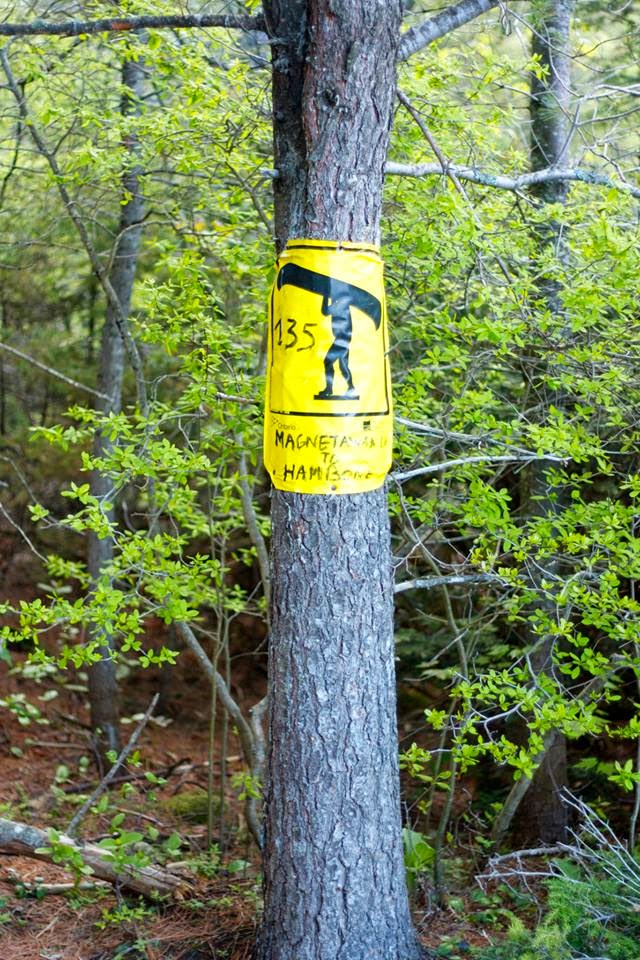 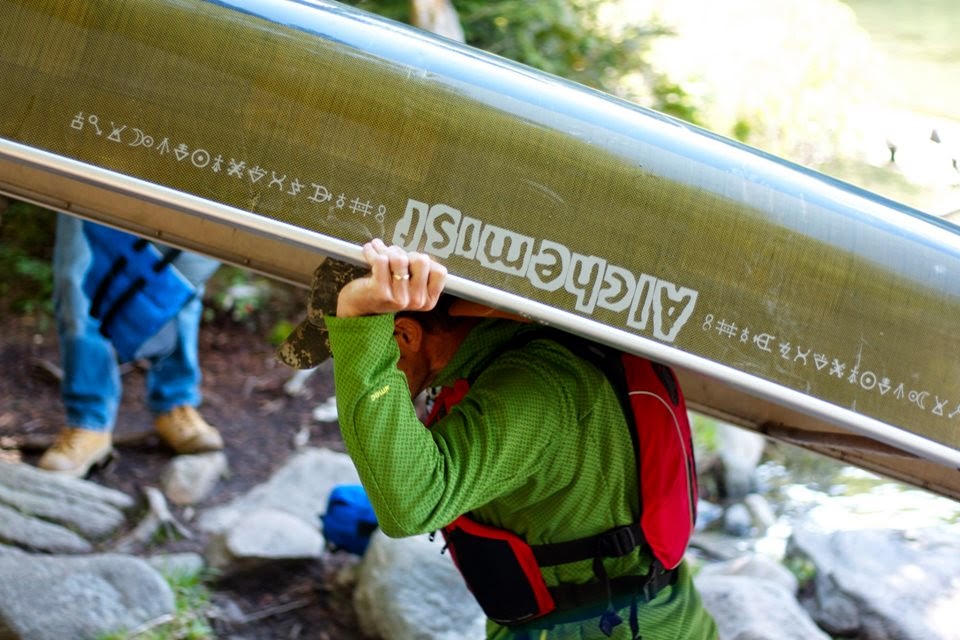 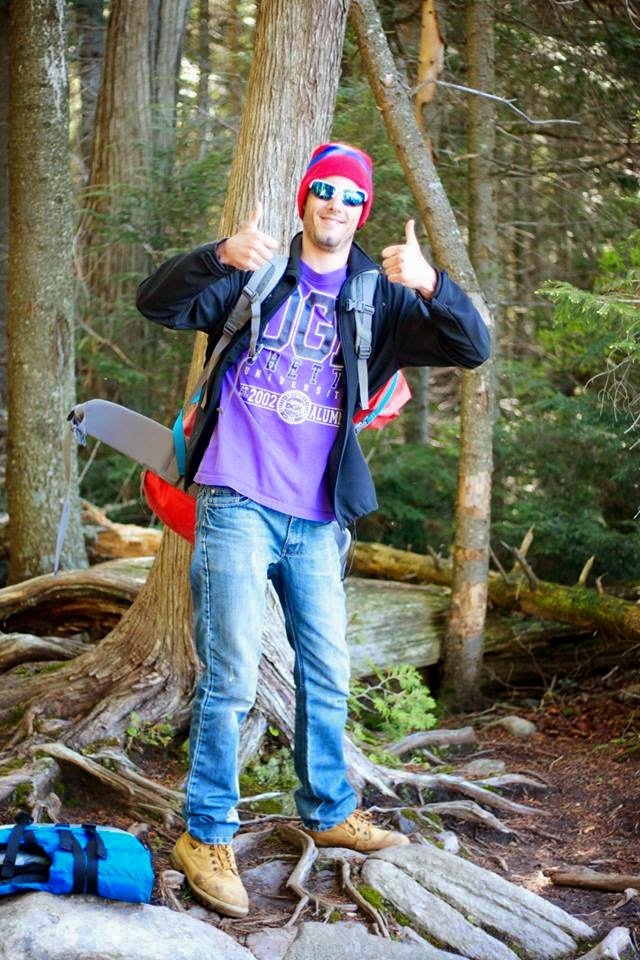 Daryl excited for the trip! 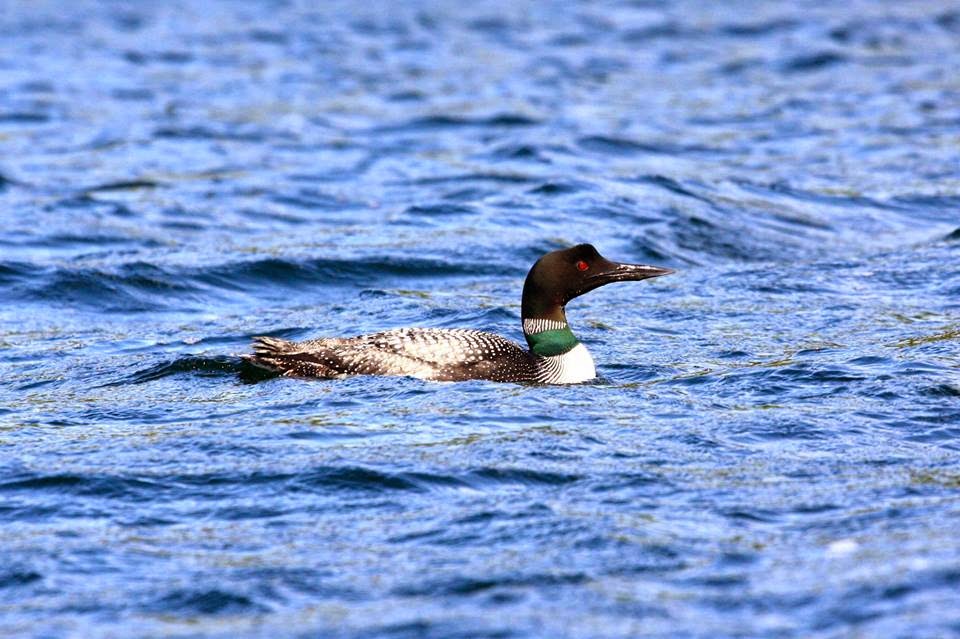 Our alarm clock for the trip 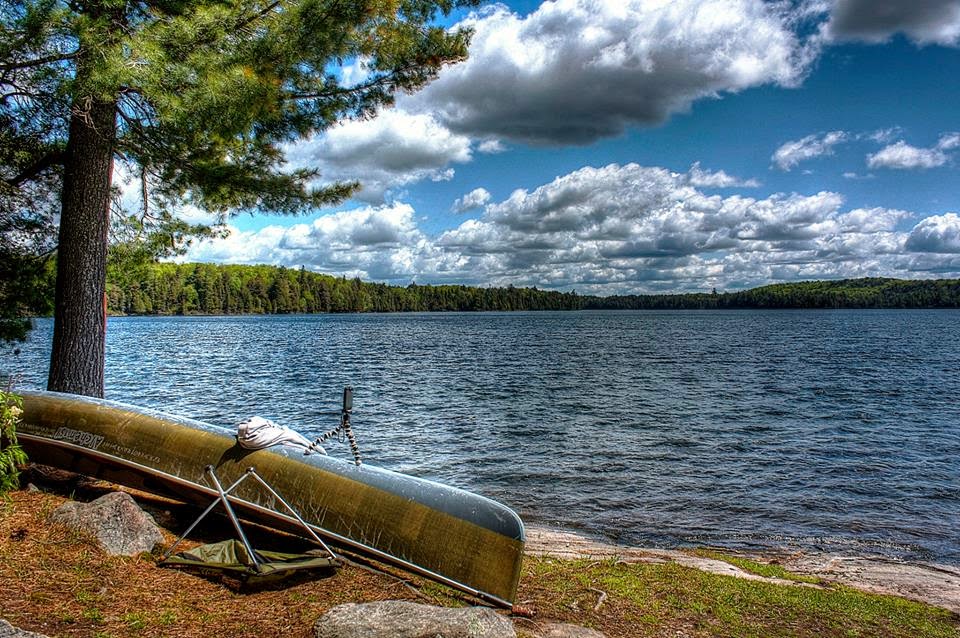 Visitors to our Ralph Bice site 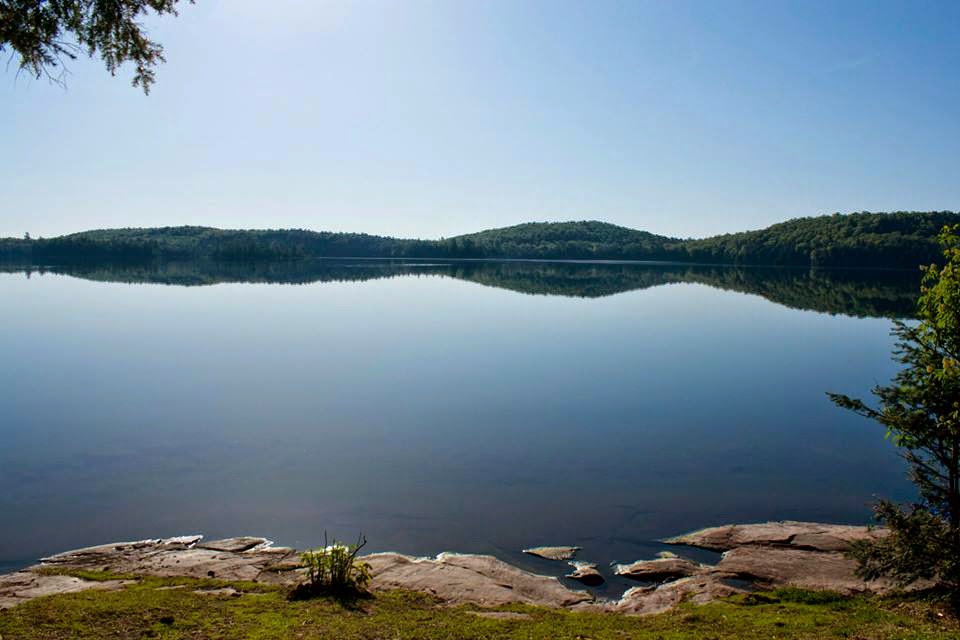 The calmest day of the trip on Ralph Bice 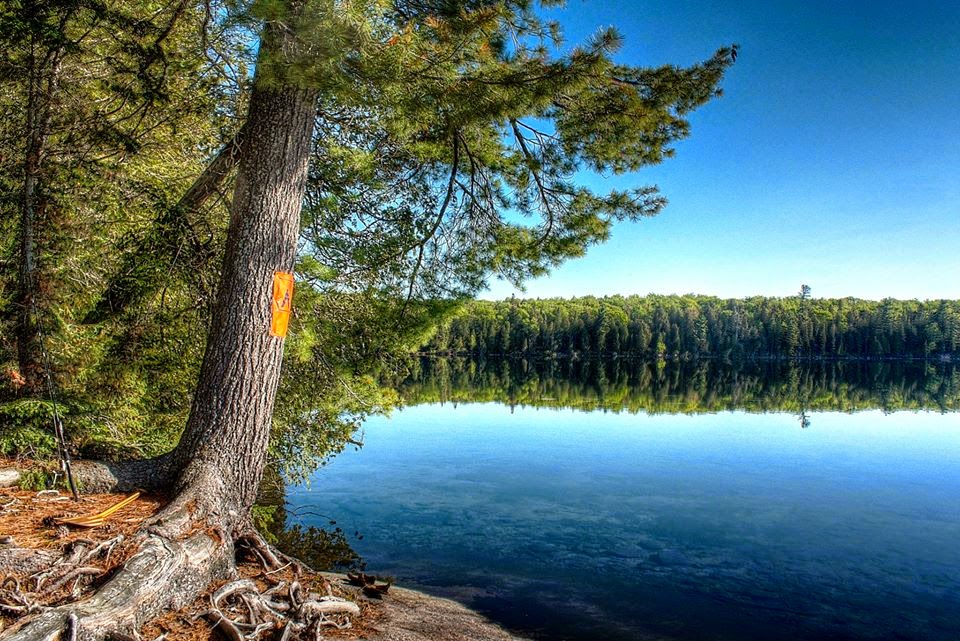 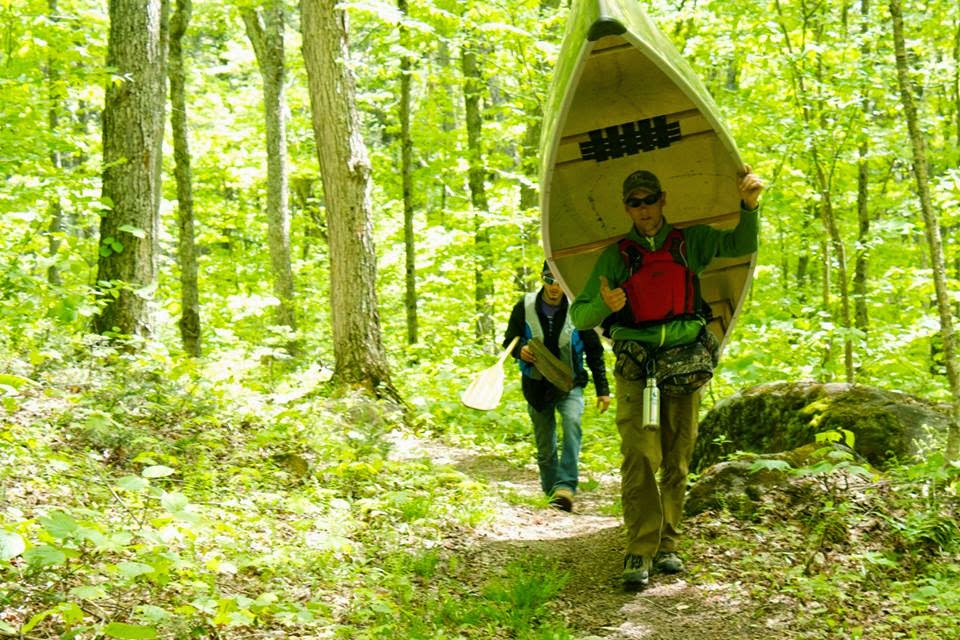 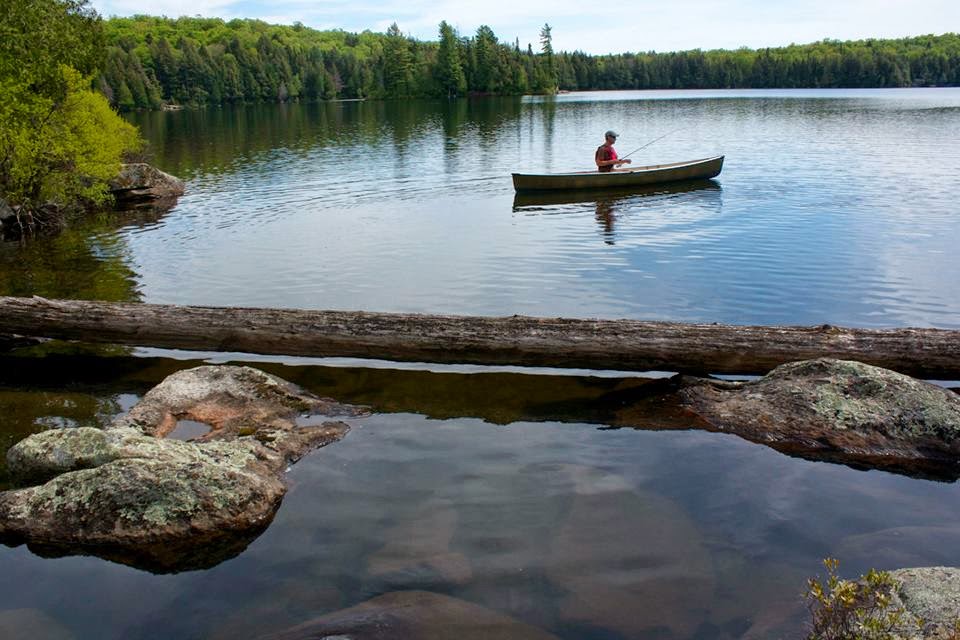 looking for the elusive Trout Blake's HDR from our site 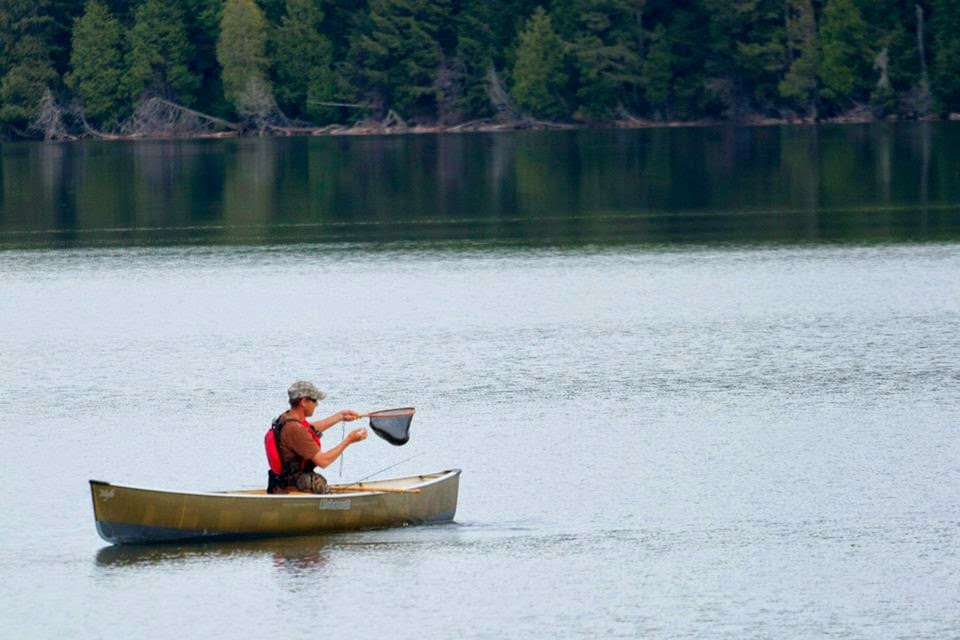 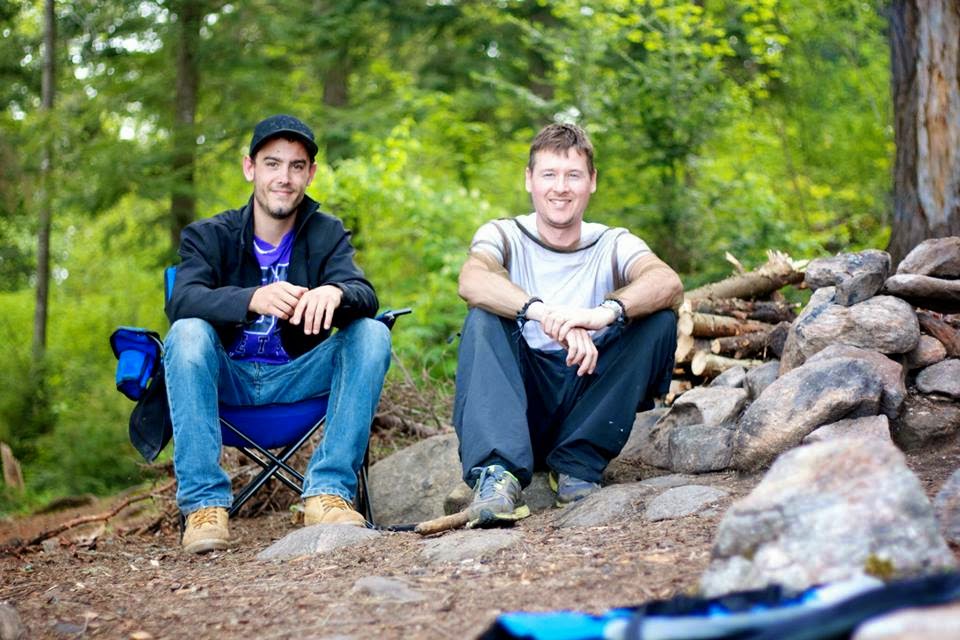 Blake and Daryl relaxing by the fire 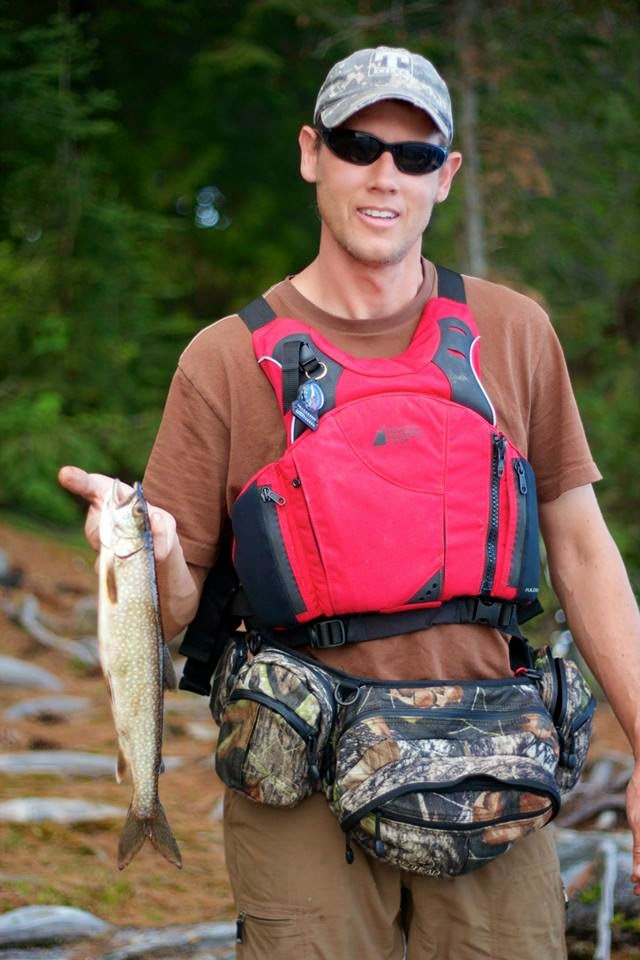 My prize for my patients 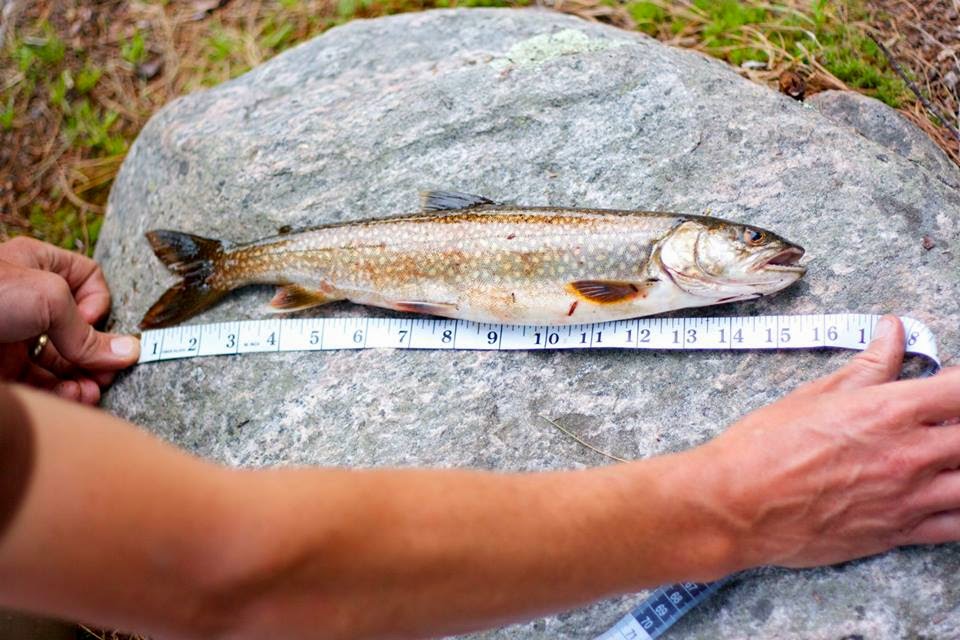 Taking part in the Trout survey 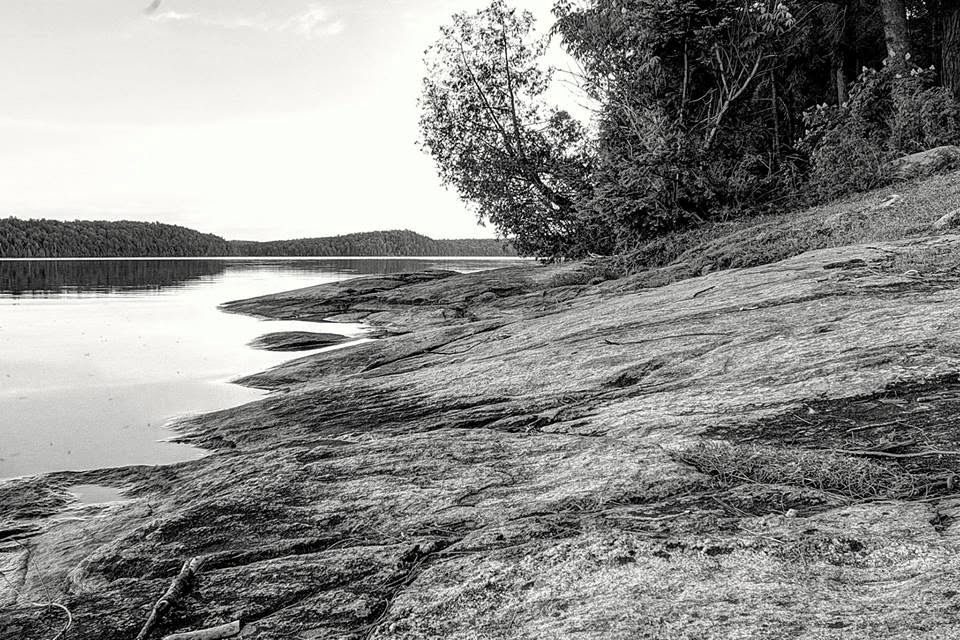 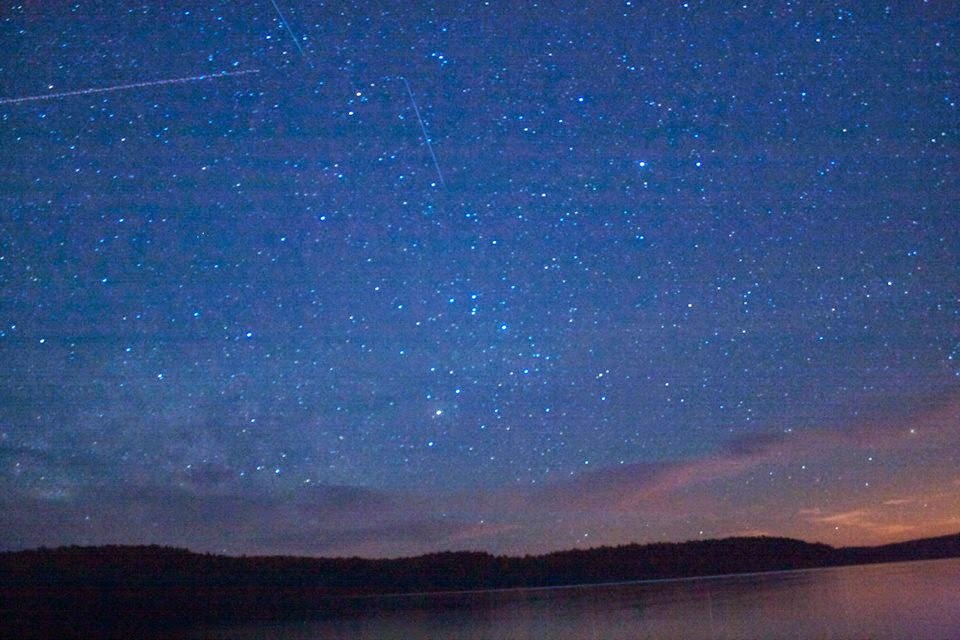 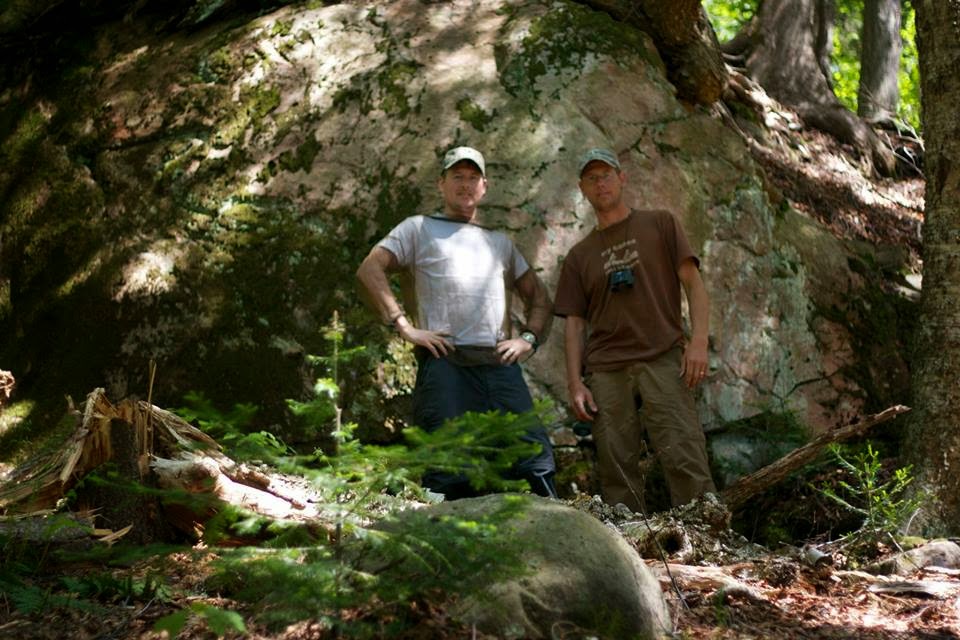 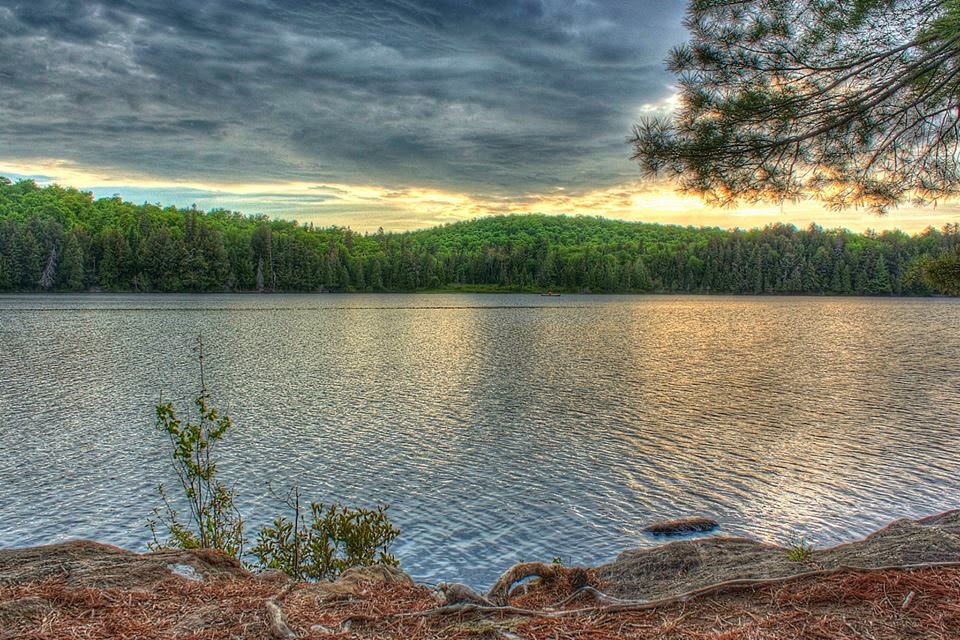 Trying for more Trout on Daisy 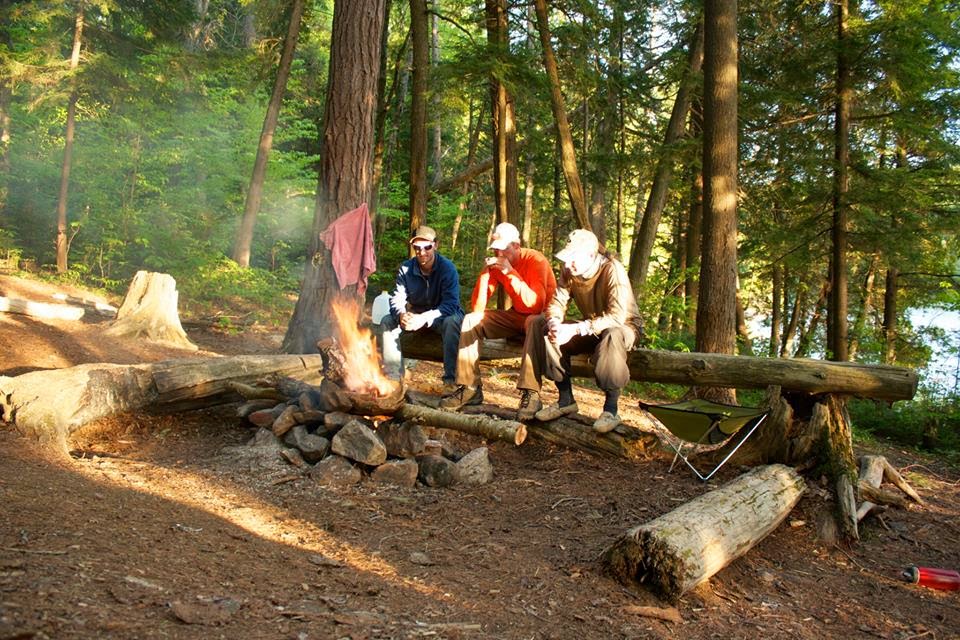 My attempt at playing some tunes on the harp. 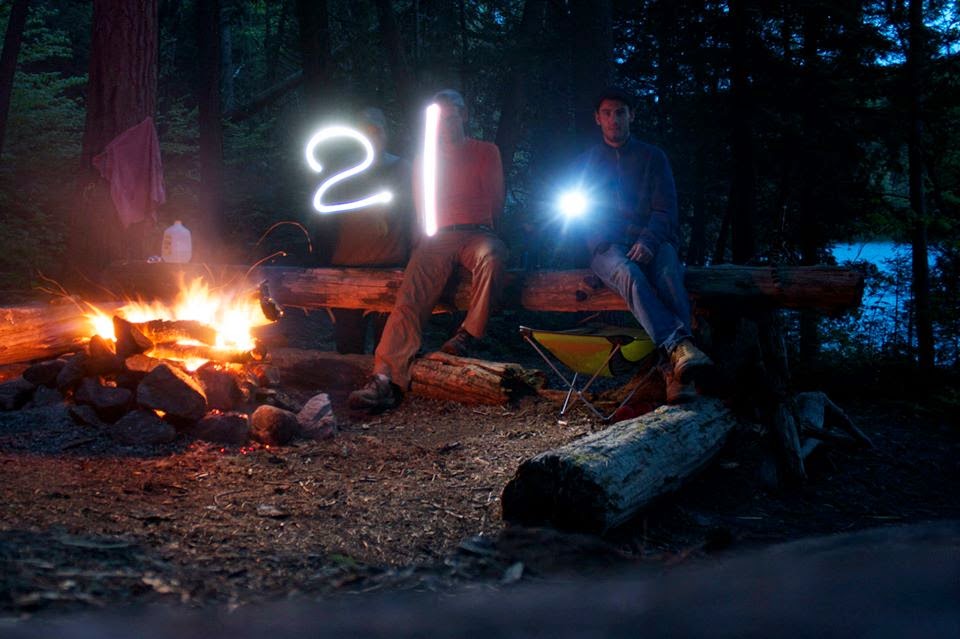 Delayed exposure with flashlights to signify our 21st trip in 10 years
at July 19, 2014